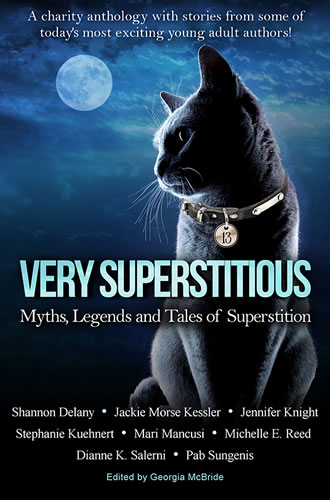 As told by some of today’s most admired young adult authors—and a few newbies—this charity anthology boasts stories that will make readers scream, laugh, and tremble with fear, and all for a good cause! Proceeds from the sale of the first 5,000 copies will be donated to the SPCA International. Based on stories long-told by the campfire, superstitions passed down through the generations, creatures who exist in legend, literature, and film, and those myths that raise the hairs on the back of our necks, these tales are sure keep readers up late at night with lamps lit and covers over their heads.

The Rescue by Shannon Delany
Thirst by Jackie Morse Kessler
Chupacabra by Jennifer Knight
The Road Home by Stephanie Kuehnert
The Gift of the Were-Magi by Mari Mancusi
Midhalla by Michelle E. Reed
Bloody Mary by Dianne K. Salerni
The Silverfoot Heretic by Pab Sungenis