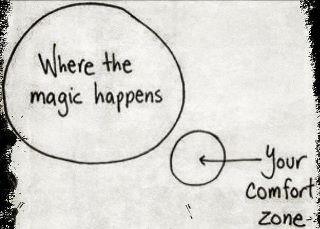 Welcome to the Deja Vu Blog Fest: The Day of the Do Over, where we recycle old blog posts that might have been missed or under-appreciated during the year.  I picked this one because I had NO IDEA where it was going to lead me.

In February of 2012, I wrote a post titled Leaving the Comfort Zone:

I saw this image on Facebook last week. It was posted by Laurie Baum Olson and came to my attention via my high school friend, Kathryn Kane. And it made me think.
Specifically, it made me think about two writing projects lurking in the back of my mind, which I’ve been reluctant to attempt because they’re outside my comfort zone.  In fact, I already made a half-hearted attempt at one of them and gave up after only a couple weeks of working on it because it was “just not me.”
But if it wasn’t really my thing, why is the idea still hanging around, bothering me?
If I tally up all my completed and in-progress manuscripts – I’ve got 1 historical fiction, 1 historical mystery, 3 historical with a paranormal bent, and 2 historical with a science fiction bent.  See the pattern?
But one of the stories “bothering” me is a contemporary ghost story and the other is a contemporary fantasy.  The second one might even have the potential to be MG instead of YA, if I play around with it a bit. (My fifth grade students keep asking why I don’t write anything for their grade level!)
Both these projects are well outside my comfort zone. The contemporary setting scares me a little, because I know I have to nail the voice of modern characters instead of historical ones, and the world building I’d need for a fantasy scares the bejeebers out of me.
But this little graphic got to me. I don’t know if there really is a place just outside my comfort zone where all the magic is happening. However, I’ll never find out if I don’t stretch and grow a little.

I’ve made up my mind to attempt one of those projects this year.

I ended up choosing the fantasy, in spite of my worries about world-building, and started writing it in April. This manuscript led me in August to Mexico, to research the setting of the climax … 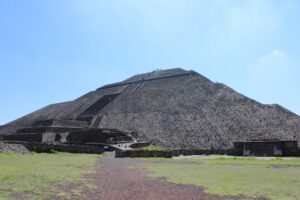 And in October, it led to this:
Author of the forthcoming YA novel THE CAGED GRAVES, Dianne Salerni’s MG debut THE EIGHTH DAY, about a mysteriously orphaned boy who discovers a secret day hidden between Wednesday and Thursday and the beautiful girl he finds next door, hiding from people who’d use her to destroy the seven day world as we know it, to Barbara Lalicki at Harper Children’s, in a good deal, in a three-book deal, in a pre-empt, by Sara Crowe at Harvey Klinger (world English).
I think the moral of the story is pretty clear.
In 2013, how will YOU leave your comfort zone?

I totally failed at transferring Mr. Linky’s link for the participants of this blog. 🙁 But you can pop over and see the list at Cruising Altitude 2.0.