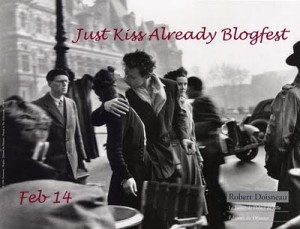 This is my entry for Christina and Stina’s JUST KISS ALREADY Blogfest, from my current work-in-progress, titled VOLTAGE:

Mick drew back, puzzled. “What are you doing?” he growled.

“Kissing you?” She sounded doubtful. “I need practice, and on somebody of no importance.”

He expelled his breath in exasperation. She was the most damnably irritating girl he’d ever met, and she did need practice. She’d clearly never kissed anyone in her life, and when she sobered up in the morning, she’d probably fire him. Mick meant to thrust her away, but found himself gripping her tightly instead.

Oh, well — in for a penny, in for a pound. Catching her head with one hand and her waist with the other, he drew her bottom lip between his own, teasingly. When she gasped in response, he pressed his mouth urgently over hers. She tasted of wine and electricity, and he quickly lost track of how much he disliked her.

One thing could be said about Ann: she learned fast. Within seconds she was copying him, her lips suddenly fierce. She sucked his lower lip into her mouth, pulled on it hard. He yanked on her hair, tipping her head back and applying his lips to her throat. She was soft and warm—and smelled good. Why did she smell so good?

Dare he grab her bottom? And then he did, and it was a good thing, too, because she went suddenly limp in his arms and his hands were the only things holding her up.

Blinking in confusion, his thoughts muddled by wine and sweet-smelling girl, Mick lifted his head. He’d never kissed anyone into a faint before.

Nor had he this time. She was passed out drunk. If Mick was lucky, she wouldn’t remember any of this.