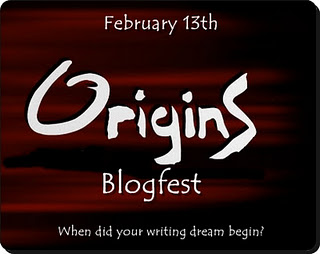 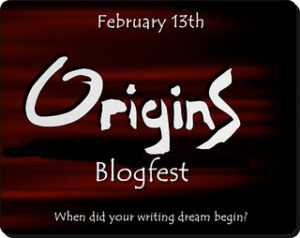 Thank you, DL Hammons, Matt McNish, Katie Mills, and Alex J Cavanaugh, for hosting this blogfest exploring the beginnings of our writing journeys.
I started writing stories before I knew how to write. My first book was  a picture book – 3 pages long and pasted together with Elmer’s Glue. The titled was penciled onto the cover by my father. It was a dragon-kidnaps-girl, boy-slays-dragon, boy-gets-girl kind of story.  In fact, that was the whole story.
I don’t remember a lot about the stories I wrote in elementary school, but I received a lot of encouragement from my fourth grade teacher, Mac Rayne, and my seventh grade teacher, Mr. Haney.  (As an interesting side note, I currently have Mac Rayne’s grandson in MY class. Nice how those things come full circle.) These stories were all hand-written in gray tablets, and sadly, I threw them away in a fit of self-loathing sometime in high school.  I wish someone had stopped me.

In high school and college I moved up to spiral-bound notebooks, along with manuscripts typed on onionskin and eventually stored on computer disks.  Some of them are dated; others can be sequenced by the covers of the notebooks. (Ahem … Empire Strikes Back …)
In high school, I submitted short stories to Isaac Asimov’s Science Fiction Magazine. It only took a few rejections for me to give up trying. It was also in high school that I got my first taste of censorship: in my junior year, our Catholic high school literary magazine was banned because we printed a poem about abortion.  All copies were confiscated, and the teacher sponsor was reprimanded.  The principal called the junior and senior editors into his office to yell at us, and for the first time I realized he knew NONE of our names, even though we were the top academic students in his school.  (He knew the football players, but not us.)

I wrote all the way through college and grad school, although I never again submitted my work anywhere. When I first began teaching, I stopped writing for a couple years, and I had only just started again when I met Bob Salerni.  As our relationship developed, he became the strongest advocate I’ve ever had for my writing. In the early years of our marriage, he sent manuscripts on my behalf to publishers and agents. (By mail. This was the 90’s.) Nothing ever came of it, and when we had children, I quit writing altogether.
In 2004 I took it up again, plunging into a completely new genre for me: historical fiction. I started a novel based on the real life adventures of two teenage spirit mediums, and unbeknownst to me, Bob began researching self-publishing.  By the time I had the novel ¾ completed, he approached me with his plan.
I like to tell people I broke into the publishing field backwards. First I published a book (High Spirits, iUniverse 2007), then I received a publishing contract for that same book (retitled We Hear the Dead, Sourcebooks 2010), and then I signed with an agent, Sara Crowe.  During these very exciting years, I also sold a film option to Amy Green of One Eye Open Studio and wrote my very first screenplay!
Also during these years, I was invited by Mike Katz of Strider Nolan Media to submit short stories to his pulp fiction anthology Visions. I resurrected two short stories I wrote in graduate school – Necromancerand Greydeere – and they were published respectively in 2009 and 2010. One of the neatest things about that experience was seeing my characters illustrated by Mike Katz and C. Edward Sellner.
As 2012 begins and I look forward to the publication of my next novel, The Caged Graves, by Clarion in 2013 (add CG on Goodreads!), I think back on the girl who wrote all those stories on tablets and in notebooks. I wonder what she would think if she knew her dream of becoming a published author would come true – but not until she’d passed the age of 40.  Would she be excited – or would she think it was too long to wait? (I’m afraid my teenage self would think 40 was practically dead.)