In Which I Make J.D. Salinger Turn Over in His Grave 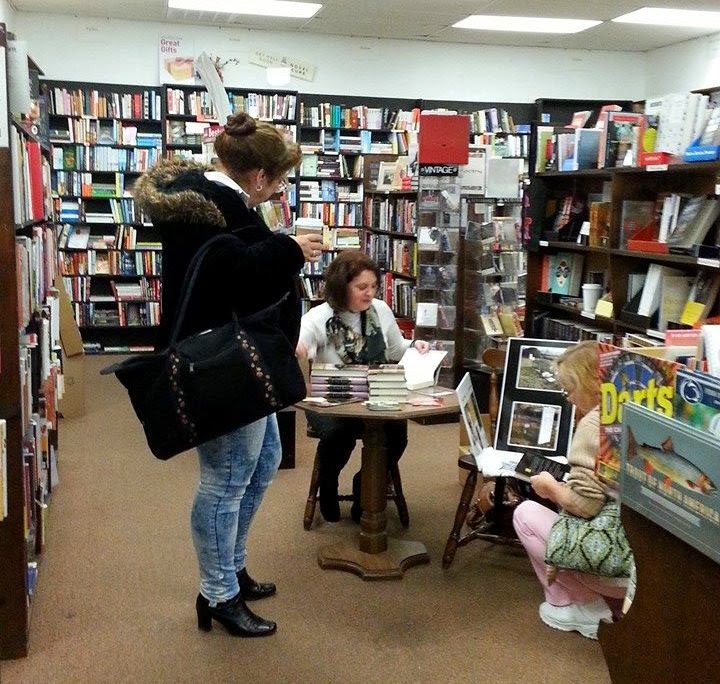 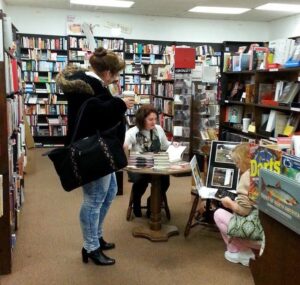 Last Friday night, I had the pleasure of signing books at Otto’s Bookstore in Williamsport, PA. I was invited by the owner, Betsy Rider, after she read THE CAGED GRAVES. (Betsy also wrote a review for the local paper and did radio spots on my upcoming visit.) I wish I could say I was responsible for the crowd that came into Otto’s on Friday, but the fact is, First Friday in Williamsport is a community event worth seeing!
On the first Friday of every month, the citizens of Williamsport head downtown to celebrate the arts. Stores stay open late to host local artists, authors, and bands. I was seriously impressed by the amount of foot traffic the store got on a Friday night in November.

Otto’s is an interesting store, too. Although for a long time they believed the business had been around (in multiple locations and under a couple different names) since 1877, Betsy and her son recently discovered ledgers proving that it actually dated back to 1841, making it one of the five oldest book stores in the country. It was actually in business at the time Sarah Ann Boone and Asenath Thomas were buried in those caged graves. My fictional heroine Verity might have shopped there! Catawissa is only 45 miles away, and Williamsport would have been easily accessible by train. 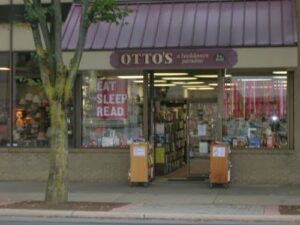 Because Catawissa is fairly local to Williamsport, a number of the people who came into the store on Friday had already visited The Hooded Grave Cemetery, or were planning to visit after they read my book. One lady brought photographs she had recently taken there. A mother and daughter stopped by who used to live right down the road from the graves.
But I’ve got to tell you why I owe an apology to J.D. Salinger. A young man came into the store, walked up to me, and asked where he could find The Catcher in the Rye and The Great Gatsby. I explained that I was an author signing books and not a store employee, and pointed out one of the staff members. A little while later, he came back to my table, removed his purchased copy of The Catcher in the Ryefrom his bag, and asked if I would sign it.
I gaped at him. “You want me to sign it J.D. Salinger?”
He shrugged. “You can sign it as yourself.”
I offered to sign one of my bookmarks instead, but he really wanted the book signed. When I admitted I felt strange doing that – and that I’ve never even read The Catcher in the Rye,he offered me The Great Gatsbyinstead. I lowered my voice to a whisper. “I hated The Great Gatsby when I read it in high school,” I admitted.
He lowered his voice too. “Then you should probably sign the other one.”
So I did. What else could I do?