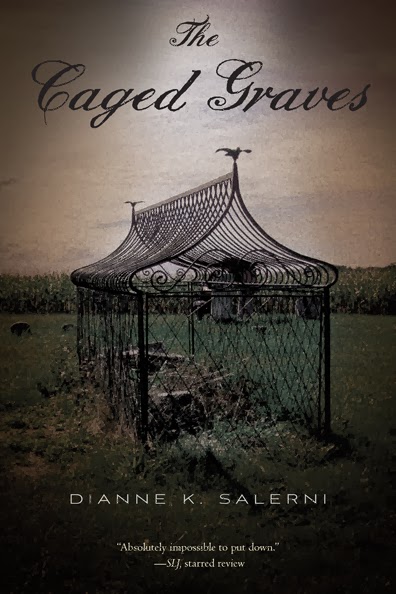 The paperback version of The Caged Graves will come out this August, and when it does, it will have a new cover. I showed it off on Facebook and Twitter last week, but in case you didn’t see it:

What do you think? I love it.

I admit I was nervous when they said I was getting a new cover, because I LOVE the first one. The girl is the striking image of Verity Boone as I imagined her, and I want to stroke and pet all the shiny gold curlicues around the title. (In fact, I have.)  Also, I saw what happened to Code Name Verity when it went to paperback.

There’s no connection between my book and Wein’s book other than the name Verity, but I just cringed over the new cover. I searched the internet, trying to find the story behind the change, and I think it had to do with a New York Times review saying the first cover looked like a lesbian version of 50 Shades of Gray. But ugh, how was a pastoral landscape supposed to be better? Too far in the other direction!

Anyway, back to my book. This new cover makes the photograph of the caged grave more prominent. (It’s my husband’s photo, in case you didn’t know. Bob gets another photo credit!) And I think there’s a greater atmosphere of mystery in this new version. That’s what The Caged Graves is, a mystery in a historical setting.

While I’m talking cover switches, let me just mention the new paperback cover for Tiffany Schmidt’s debut book, Send Me a Sign. Tiffany is one of the nicest people you’ll ever meet (I know. I met her. And not just on the internet, either.) I’m delighted that her new cover is an improvement over the old one!

Can you think of any cover changes that you’ve particularly liked or disliked?

Don’t forget — my Anniversary Giveaway is still running until the end of this month. Enter for more chances to win! Also, Marcy and I have 3 spots open in February for a first page critique. Make a good “First Impression” with editors, agents, and readers!