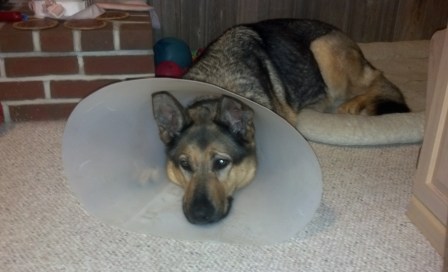 So many of you expressed your concern about my dog last week, I thought I’d give you an update. Sorcia had one small cut on her leg which almost healed on its own TWICE, but she kept gnawing at it and tearing off our bandages. When it became infected, we had to take her to the vet, which resulted in antibiotics, steroids, antiseptics, and the Cone of Shame. 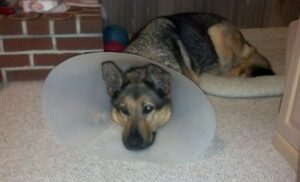 Yes, she does look sad and dejected, doesn’t she? But the fact is, she’s going to have to stay in that stupid thing until the fur grows back, because every time we take it off, she slinks out of our sight and starts gnawing on her leg again.

Once, when we took it off so she could eat her dinner, we took our eyes off her for just a minute, and she re-opened the wound. Now, a member of the family is assigned to WATCH her eat and stick the cone back on immediately.

She already answers to “Sorcia” and “The Dog” and “Beetlejuice” (long story, don’t ask). Now she also answers to her new nickname, “Cone Head.”

In other news, I was very thankful and appreciative to the staff at the Exton, PA Barnes and Noble for helping me launch THE CAGED GRAVES — and very grateful for all the friends, family, and co-workers who came out to support me! 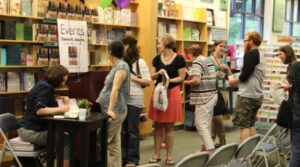 I also was very excited when Huffington Post Books posted my article on caged graves, the Fox sisters, and several other creepy mysteries. If you haven’t already seen it, I’d love it if you could “like” the article or pass it along!

I’ll be back on Friday, participating in the WHIP IT GOOD BLOGFEST, hosted by D.L. Hammons and Elise Fallson. (Yes, I remember the song. Yes, I am that old.)

And you know what? By the time you read that Blogfest post, I’ll STILL have a week and a half left of school. (sob, sob, sob)