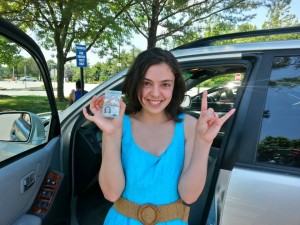 Yes, my daughter Gabrielle now has a driver’s license. How did that happen? Wasn’t it only last year that she was THIS big?

The driver’s license thing happened during my last full week of teaching, so on top of the stress of ending both the school year and my teaching career, I had to worry about her driving to and from finals while I was at work. She made out fine (although once or twice she forgot to text me upon her arrival).

Luckily, my younger daughter, Gina, who rode with her on the way to school was very consistent about notifying me every time they reached their destination with a text that said:

From other parents out there who have survived a new driver in the house, any tips on how to stop worrying? So far, I’ve been letting her run small errands for me, just for the practice. But every time she heads out, I think: Why did I let her go out on that errand when I could have done it myself? What is wrong with me?

Other things that happened recently:

1. If you missed last week’s post describing the evolution of The Inquisitor’s Mark cover from sketch to final design, you can still find it HERE AT PROJECT MAYHEM.

2. And today I’m HERE AT THE CROWE’S NEST, my agent Sara Crowe’s blog, talking about all the things I didn’t know about writing a series when I signed the contract.

3. And I’d also like to mention that Joshua David Bellin interviewed his son about The Eighth Day HERE AT THE YA GUY. If you don’t know Josh from #YALitchat and #KidLitchat, I suggest you head on over, check out his blog, and follow him on Twitter!

4. Something else pretty awesome that happened in the last couple weeks is this … How many of you have read The Caged Graves? Raise your hands. Okay, would you guys believe I was recently contacted by the great-grandson of Ransloe Boone? The real Ransloe Boone, husband of of Sarah Ann Thomas Boone, one of the women buried in the real caged graves?!

That’s too good a story to tack on to the end of this blog post, so I’ll be telling you more about our correspondence next month, after my First Impressions posts for July.

Good-bye, June. You lasted way too long, and I saw you mostly through a classroom window. Looking forward to July!