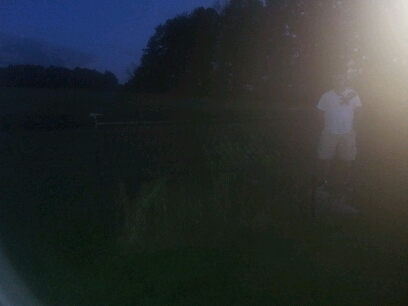 Shortly after Krystalyn Drown posted my cover and interview on her blog, See the Stars, one of her blog followers realized he lived near the actual caged graves and drove out to take a look at them with a friend.  Soon after that, he contacted me to ask whether anybody else had seen glowing lights turn up in photographs of the graves.

Uhhh … I’ve never been there after dark.
I’m not sure I’d liketo be there after dark.
But Bill Concini is obviously braver than I am.  He and his friend were out at the Mt. Zion Cemetery (aka the Hooded Grave Cemetery) around dusk and took pictures of themselves and the graves with their cell phones.
And they noticed something strange.  Bill is pictured at two different graves, and the photos are taken with two different cameras.  In each one, he’s surrounded by a glow.  By contrast, all the photographs taken of his companion have no glow, no matter which camera was used.
Two possible explanations:
1.  Bill just has a glowing personality!
2. Sarah Ann and Asenath took a real shine to Bill.
Honestly, this cemetery spooks me out no matter how many times I visit it.  Did I mention that ALL the headstones are for women and children?  My daughter and I searched the cemetery and couldn’t find a single headstone for an adult male.  Is that creepy or what?  Granted, some of the headstones are probably missing (plenty of the ones still present there are broken), but only women and children?

A special thank you (and a tip of the hat for bravery) to Bill Concini and his intrepid companion for these photos!