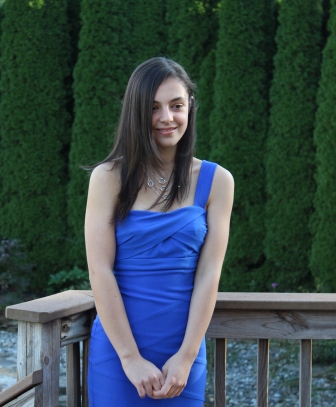 A Slice of Salerni Life 2012
The End of the World

Gabbey: (looking over Dianne’s shoulder) You too, Mom? All my friends on Facebook are being weird about the world ending, and I’m like, “Really, people? Don’t make me unfriend you.”
Bob: You can tell them Mommy and I saw the actual Mayan calendar at a museum in Mexico City this summer, and it said nothing about …
Dianne: That was the Aztec calendar, dear. Not the Mayan one.
Bob: It was? Oh. I got nothin’ then.
Gina passes by with a suspicious-looking can in her hand and sticks it in the refrigerator.

Dianne: That better not be crickets!
Gina: (snorts in derision) Why would I put crickets in the refrigerator?
Dianne: What was in the can, then?
Gina: Worms.
Dianne: I can’t believe we let the girls get lizards. Feeding raw chicken to the dog wasn’t enough, we’ve got to keep live vermin to feed the lizards?

Sorcia: Whine, bark, whine, whimper, sob. (Translation: I can’t believe you got lizards either. Stop looking at them! Look at me! Look at me! Look at me!)
Bob: 2012 was a good year for us. If the world has to end, at least it’s ending on a high note.
Gabbey: I’m not listening to this anymore. (puts ear buds in her ears) I’m putting on The Legend of Zelda, Symphony of the Goddesses.
Dianne: (snaps fingers) That’s right. Gabbey went to see her first concert this year. A symphony. Very highbrow. My first concert was Journey.
Bob: (raises a hand) Huey Lewis and the News. 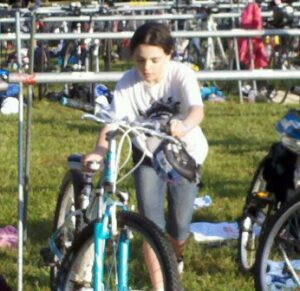 Gina: I’ve never been to a concert, but I really, really, really want to see Justin Bieber.
Gina: (looking over Dianne’s shoulder) ARRGH! Take that out! That is NOT true!
Dianne: (applies strikethrough) Okay, okay. I was just making a joke. So Gina has never been to a concert, but she went to an air show with Tara and competed in TWO triathlons.
Gina: And Dad was awesome in the Atlantic City Triathlon with Chris and Andy! He did the bike leg in just over an hour.
Bob: Thus in the middle of the pack and thoroughly beating my goal of not being last. We even got Mom on Gina’s bike this year and built her stamina up to almost 10 miles. All she needs is one of her own, and we can go riding as a family.

Gina: You think Gabbey will come with us?
Gabbey: (pulls out one ear bud) What? In the sunshine? Unlikely. (hunkers over her laptop and types intensely)
Dianne: Don’t give us that dark, teenage attitude. We know you can do “bright and perky” after your performance in Snow White this fall. And you were pretty animated in the Avon Grove Community Theater’s production of The Music Man, too.
Bob: Wow. I almost forgot about the show this summer. How did we squeeze that AND Gina’s band camp between Spiderman on Broadway and Teotihuacan, Mexico?

Dianne: You know, not many husbands would plan a spur-of-the-moment trip to Mexico just so the wife could write a better climactic scene to her fantasy novel.
Bob: (coughs“tax write off”) Well, climbing to the top of the Sun Pyramid was well worth the effort, considering The Eighth Day sold to HarperCollins in a 3-book deal.
Dianne: 2012 was a darn good year, but I’m looking forward to 2013, too. Gina in Oklahoma!at the middle school, our annual Pocono ski trip …
Gina: The Spirit Game film, The Caged Gravesgetting published …
Bob: Maybe Vermont over Spring Break and Europe over the summer … 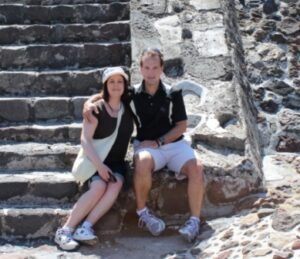 Gabbey: (perks up) Driving lessons!
Silence. A long, LONG silence.
Bob: Maybe we shouldhope for the end of the world.
Gabbey: Ha, ha. Very funny.
Dianne: Regardless, 2012 has been a wonderful year. (gives Bob a big kiss)
Gina: Ewwww. Gross! (This from someone who puts worms in the refrigerator.)
Sorcia: Whine, bark, whine, whimper, sob. (Translation: Stop kissing her! Kiss me! Kiss me! Kiss me!)
HAPPY HOLIDAYS, EVERYONE! SEE YOU IN JANUARY! 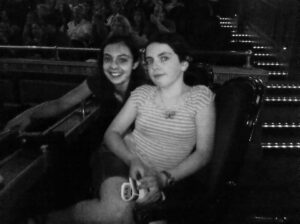