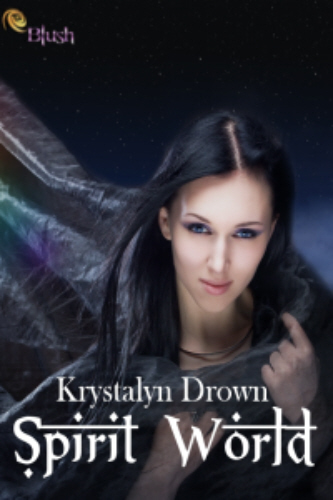 It was only a couple months ago that I announced the sale of my critique partner Krystalyn Drown‘s YA paranormal romance, SPIRIT WORLD to Entranced Publishing.  And she already has her cover!

But before I show it to you … ta da … an interview with Krystalyn!

What was the inspiration for writing Spirit World? Where did the story begin?
I have always said that if I got a tattoo, it would be of the Chinese symbol for serenity, and it would be on my right shoulder. I started to think about a character that would have that tattoo, and why she would need it. The story itself started with the idea of having little guides (like an angel on one shoulder and a devil on the other) but then it quickly became what it is now, a story about a girl who can hear voices from another world. The first title was Angel on my Shoulder.
Entranced Publishing is a fairly new company. How did you hear of them? What has it been like working with them so far?
I was looking for smaller publishers to submit another project to. I ran across Entranced in a list on a blog. My other MC wasn’t quite old enough for what Entranced was looking for, but Spirit World fit perfectly with what they wanted.
How does it feel to be waiting on your editorial notes? You’ve received crits from various beta readers on this story, (I happen to know!) but these are from an editor. Are you nervous? Excited? Worried?
I think a little of both. It’s always nerve wracking when you’re awaiting feedback from someone you haven’t worked with before. But I am very excited to see how the editor thinks I can improve my work.
Tell us about your other current writing projects!
I am working on an MG novel called Tracy Tam: Santa Command, which I describe as Artemis Fowl meets The Santa Clause. I’ve also dug out an old short story that I’d like to revamp into a novel.
Before I ever read a draft of Spirit World, you told me that out of all your works, Riesa was the character nearest and dearest to your heart. (I have one like that, too.) Tell us what makes Riesa special to you.
I think she has a lot of me in her. While I certainly have never had ghostly voices in my head, I do love my sci-fi, which is a big part of her. Plus, I gave her the tattoo I wanted.
And now, the cover:

Gorgeous, huh?  SPIRIT WORLD will be available April 15, 2013.
That’s a month before my book.
And there’s a cover reveal for THE CAGED GRAVES coming tomorrow from IceyBooks …