I’ve heard a lot of grumbling lately about the reluctance of winter to cut loose its hold on us. It’s spring – it’s the end of March! We’ve had enough lion and would like a little lamb, please! But winter doesn’t always respect the calendar.

On April 1, 1997, we had four inches of snow dumped on us here in Pennsylvania. No fooling! It came as a complete surprise, and they even cancelled school. I have every reason to distinctly recall the day. Bob shoveled those four inches off our front stoop and uncovered the car so that he could drive me to the hospital to have a baby.

This was the view from the car. I thought it was funny. 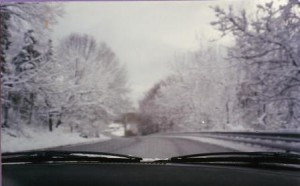 Of course, the joke was on me. Twenty-four hours later, after some false starts and several hours of grueling hard labor that went nowhere, I was rolled into surgery for a C-section. Gabrielle Erin wasn’t born until April 2, around 6am in the morning. 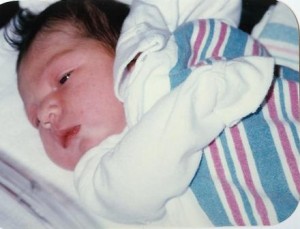 This Friday, April 1, I’ll be posting the first of three First Impressions – short, first page crits volunteered from blog readers. Marcy Hatch over at Mainewords will be joining me in the critique of each one.

We have 1 space open for May. If you’d like to have a critique of your first page, email me at dksalerni@gmail.com with First Impressions in the subject line and your first page pasted into the email (not attached). Hoping to hear from you!