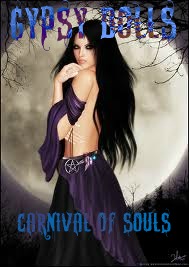 Our final First Impressions for the month of September is the first page of Sheri Larsen’s YA Paranormal, GYPSY DOLLS: Carnival of Souls.

The last thing I expect to see is a dead guy.

Buses idle by the curbing. Newly falling mist dowses the vapors of diesel fuel, but does nothing for the sting in my eyes. My eyebrows ram together. Lines on my forehead mangle like wrinkly lettuce. With one eye cinched, I peer at the collage of jocks and their cheesy girlfriends huddled across the cramped parking lot, their figures miniaturized with all the distance between us. I squish their shrunken heads between my fingertips and thumb, imagining their faces deflating. It’s not like the splat of their heads would make a mess; there’s nothing between their ears but air and arrogance. One girl yells my name and gives me a perky wave. Not big on socializing and in no mood anyway, I slosh my combat boots in the puddles of September, switching my mashing fingers into a peace sign, and trudge past. It’s safer…for her. My fiery attitude needs to cool down.

Being accused of stealing tends to make me angry. Sure, I’ve had a slight bout with sticky fingers in the past—but that’s in the past. I’ve done my time at the Hinckley School for troubled teens, so Sue Rogers can take her surely accusation and stuff it. What would I want with her hairbrush anyway? Any idiot knows I only need her hair to concoct a good hex.

Waiting in line, I glance down at the patchwork of miscellaneous cracks in the pavement, each tangled crevasse looking as befuddled as I feel. My life isn’t exactly the poster pinup for the successful teen in today’s America. Actually, today’s America is hard to define since the end of the Mayan calendar in 2012 unearthed a new prophetic timeline and the CST—Council for Subconscious Thinking—was created a year later and implemented in schools to broaden the human psyche. Now, Elders—the government’s idea to guide Generation Alpha into utilizing more brain power, but I define as mind breachers—float around, poking their brainwaves and opinions where they don’t belong. The adult population is so wrapped up, thinking mankind dodged the End Times, they’ll agree to anything. They think we’ve been reborn, given a second chance—I’m thinking the umpteenth chance. Apparently, the Holocaust, Darfur, wars throughout history, and the escalating crimes that rock our world are only near End Times.

Living in the land of the free really isn’t free—at least of mind, anymore.

Okay, I absolutely love the narrator “squishing” the heads of the jocks and their girlfriends with her fingers. I’m intrigued by her “sticky fingers,” which earned her some time at a school for troubled teens. And I snorted at the idea that she didn’t need to steal Sue Rogers’s whole hairbrush to “concoct a good hex.”

There are some sentences that could come out of here for a cleaner, smoother text. After mentioning how the diesel vapors sting the eyes, the author could delete two sentences and skip to “With one eye cinched …” The sentences in between repeat the same idea and aren’t really necessary as a transition.
I wonder if the girl who gave the perky wave should be named, because in my first reading, I thought she was Sue Rogers. That didn’t make sense as I read on, and I had to go back to understand how the two paragraphs were connected. Alternatively, that girl could be left out altogether. Pretending to squish heads with her fingers is the act of an angry young lady, and the second paragraph explains why she’s angry. No need for a perky girl to interrupt that train of thought.
As for the next paragraph, it gives a lot of backstory all at once. I think it’s probably risky to load this much information on the first page. I suggest identifying the most important idea from that paragraph – the one thing readers need to know before moving on to the next page. Connect that to our narrator’s personal experience, and save the other details to be slipped in over the next few pages.
My final comment for Sheri is: Where’s the dead guy? Now, I don’t think everything has to appear on Page 1. But if the dead guy doesn’t show up in the first scene, you might expand on that opening sentence so we know when to expect him. (Ex: The last thing I expect to see is a dead guy at the bus stop … OR on my first day back at school …OR sitting behind the teacher’s desk … OR wherever he’s going to show up.)
Oh — one more — my final, final comment is LOVE the title!
Sheri, thanks so much for sharing your first page with us! Readers can find Sheri at her blog, Writer’s Ally, and don’t forget to read Marcy’s critique at Mainewords!
Currently seeking submissions for October and November! See the sidebar for details!