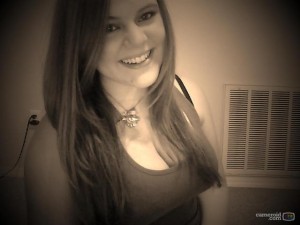 Hello, October! Today, I’m bringing you a First Impression of teen writer Gabbi Calabrese’s YA paranormal WIP, UNVEILED.
I was the first person in the class to finish my test, but that wasn’t necessarily a good thing. Especially considering I guessed on all but three of the twenty-seven questions. Perhaps I should have studied the previous night, or, you know, did one of the three billion worksheets that Mrs. Gonzalez handed out that week.
I like the opening paragraph! I can already see I’ve got a snarky MC on my hands, with a snappy narration to match her character. With that in mind, how about trimming the last sentence a bit? Perhaps I should have studied, or did one of the three billion worksheets Mrs. Gonzalez handed out.
In my first drafts, I tend to pack my narrative with excess adjectives, prepositions, and thats. Then I spend the next several drafts taking them out! As we go on, I’m going to suggest some places you could trim words, too.
But I was a notoriously excellent guesser, so I figured I’d at least make a C.

Yawning, I leaned back in the uncomfortable and hard plastic chair. I rested my feet on the little metal basket that was attached to the bottom of the seat in front of me. Its intended purpose was to hold text books, but I believed that my feet were much more worthy of its support.

The second my sandals landed atop of the metal, Mrs. Gonzalez cut me a sharp look and pursed her lips. Oh no, I might break the new desks. I grinned at her, hoping it came across innocent, and tossed one of my shoulders into a shrug. If I wasn’t going to get paid for attending school, I was sure as hell going to make myself as comfortable as I wanted. Mrs. Gonzalez rolled her eyes, irritated, but I was pretty sure she expected nothing less from me.

Time slowly ticked away as I squirmed in my seat, trying to find a position that didn’t make my ass numb. Seconds turned to a minute. Five minutes. Ten freaking minutes. Really? Only eight of my delightful peers had turned in their tests. That left twelve more. And I repeat: Really? The test was focused on denitrification. You either knew the answer or you didn’t, and for the answers you didn’t know, you guessed. It wasn’t that complex of a concept.

All of these strikeouts are just suggestions, of course. But I LOVE her voice (delightful peers – LOL) and snipping out unnecessary words will make it all the more clear and vibrant.
The next two paragraphs describe your MC’s boredom. I’m going to suggest taking them out or reducing them. You don’t want too much boredom on your first page — LOL! There is one line in the middle that seems important, though. You’ll want to make sure that stays in:
I hadn’t gotten much the night before, with the nightmare-slash-dream weirdfest that occurred every time I fell asleep.
Huh. Interesting! Next, we get to meet an obviously important character:
The guy who was sitting in front of me whipped his head around and glared at me. Any snappy comment I was going to make refused to surface.
Asher Eaton. Since when did he sit in front of me?
His eyes were a stunning emerald green color. I wanted to look away, wanted to avert my mind from even thinking about his eyes and where else I had seen them. But I couldn’t. I didn’t cower away from anyone’s stare. Especially Asher Eaton’s. His gaze dipped, but I knew it wasn’t to break the eye contact. My legs, which I didn’t even realize I was jiggling, were shaking his desk. If it were anyone else I would have mumbled out an apology. Instead, I just dropped my feet from the basket under his seat and raised my eyebrows in a happy now? way.
Okay, now you’ve got me curious because I’m wondering where she’s seen Asher’s eyes. In her nightmare-slash-dream weirdfest, perhaps? However, I’m not sure about her reaction. It seems to me that she would raise her eyebrows sarcastically at most people – that’s how she reacted to her teacher. But if Asher affects her strangely, might she not act out of character and mumble an apology? That is, are you sure her reaction wouldn’t be the opposite of what you’ve shown? Just a suggestion, of course, because I don’t know how these two are going to interact later.
Gabbi, thanks for sharing your page! I think you have a great voice and a main character who’s already got me curious about her story. At this point, I would definitely keep reading to find out more about her! (Can I just say that between Samantha, Dylan, Gabbey, and now Gabbi — I’ve had some amazing teen writers sharing their work on this blog?)
Please stop by Marcy’s blog to check out her critique, and you can find Gabbi at her new blog WriTEEN Adventures.