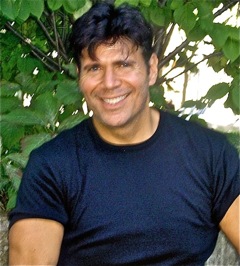 Our second First Impression for October is Michael DiGesu’s THE BLINDED GARDENER. It’s an edgy Y/A Contemporary about a seventeen-year-old boy abused by his Marine father.

One moment I’m my Dad’s personal punching bag, and the next, well, I’m a pawn in his maniacal master plan. That is, until Danny stepped into the picture and discovered my secret.

Dad forced me to move across the country, and once again, I found myself at a new school, the third in two years. It sucked having a dad in the military.
The warning bell rang for first period. The halls cleared with the slamming of doors. As I wandered about searching for my classroom, I heard someone approach me from behind. I turned and saw a blonde guy walking up the center of the hallway. Long bangs fell over his eyes as he loped past me with a kind of natural ease.
How blind is this guy? Didn’t he see me standing here, fiddling with this useless map.
“Hey, dude. Could you tell me how to get to room 305?”
A slight curl formed on his lips as he faced me. He tossed his head. Platinum fringe shifted to the side and revealed freakish blue eyes that glanced toward me, unfocused.
Holy shit! Is he blind? Stoned is more like it.
“I’m heading that way.” His deep voice held a trace of a southern accent. He turned and continued his long strides.
I envied his height: well over six feet and me just an average dude.
“You better move. Connors loses it when you’re late.”
I rushed to catch up to him. His hand overshot the rickety metal banister. On the second swipe, he made contact and climbed the stairs.

I really like the opening sentence – especially the alliteration! One moment I’m my Dad’s personal punching bag, and the next, well, I’m a pawn in his maniacal master plan. But I think the shift to Danny in the second sentence happens too soon for me as a reader. I want to hear more about the MC’s father and himself. Not a whole page worth, mind you — but another sentence or two, so that we get a feel for the MC and his dad before a third character is mentioned.

If the opening is expanded, the sentence introducing Danny can stand on its own, in a separate paragraph (possibly with a new transition.)
Then Danny stepped into the picture and discovered my secret.
The next paragraph could use some grounding in place and time, because we’re shifting from general, introductory statements about the MC’s life into a specific scene. Perhaps something like:
In the spring of my senior year, Dad forced me to move across the country from Oregon to Maine, and once again, I found myself at a new school, the third in twenty-four months. (I’m making up the details, but you see what I mean.)
At that point, I think we’re completely ready to dive into the scene where the MC meets the blond boy with the freakish eyes who appears to be stoned – and who I’m guessing is Danny. I think this part is great and plants the reader directly in the MC’s world.
One last note: The first sentence is in present tense; the rest is in past tense. That might be deliberate, as the narrator moves from a general reflection about his life to the past events he wants to relate. In that case, it might be beneficial to set that first sentence (and any additional ones that get added) apart from the rest of the text – maybe in italics, with a space break before the next paragraph? What do the rest of you think?
Thanks, Michael, for sharing your first page with us! Be sure and take a look at Marcy’s critique at Mainewords, and Michael can be found at his blog, In Time …