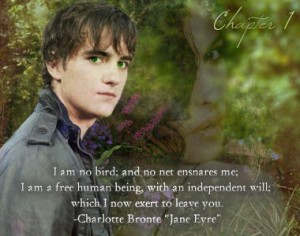 Our second submission for First Impressions is Transforming Silence, a paranormal YA by Em Salgado.

I am no bird; and no net ensnares me; I am a free human being, with an independent will; which I now exert to leave you.
-Charlotte Bronte “Jane Eyre”

“Excuse me, are you Jack Thorn?”

I turned around and there was a short, reed thin man staring at me with a timid look on his face, as if he was afraid I’d say no. Or was he afraid I’d say yes? I shrugged my shoulders and answered, “I am, and you are?”

He took a quick step forward, entering my personal space and making my defenses rise. His face gained a mischievous grin as he said, “My Queen wishes your company, if you’d just stand still a moment,” and with that he flicked his bony fingers in my face and I felt cold liquid land in my eyes.

“Hey! What is your problem?”

I rubbed at my eyes as a burning sensation went straight to my brain. My whole head felt on fire for a moment. Then, just as suddenly as it started, it stopped. I opened my eyes and looked around for the skinny jerk so I could punch him in the face, but he seemed to be nowhere in sight. The sound of someone clearing their throat made me spin around.

Suddenly I was face to face with an emaciated, green colored thing that resembled the man from before. His thin smirk was creepy on his face, complete with pointed chin and skin that looked stretched so tight it might tear at any second. He put a bone thin finger to his lips and when he giggled the sound was harsh and biting like rocks crashing into each other.

“If you talk to me now, people will think you’re crazy. Only you can see me at this point in time. Follow me for answers, or stay here looking like you’ve seen a ghost. The choice is yours.”

Immediately, I like the voice of this narrator, especially in these phrases:

I opened my eyes and looked around for the skinny jerk so I could punch him in the face.

This is a bold opening, throwing us directly into a fantastical (and confrontational) situation in the opening paragraphs. It actually struck me as a sharp contrast to the Jane Eyre quote above it, and I wondered what connection Jane Eyre had with this sharp-tongued Jack Thorn.

I’m not really sure where the scene takes place, so the little man’s sudden transformation into a green monster isn’t quite as effective as it might be. Just a sentence or phrase to place Jack in a specific location (on a city street? in school? in some alternate universe?) would really help us visualize the scene and understand the significance of the event. The use of the date 1992 suggests it’s our world, but I’d like more information.

There are a couple places where I’d like to see some minor edits. I’m not crazy about the verb gained in His face gained a mischievous grin, and the plural pronoun their should not be used for a noun that can have only one owner: The sound of someone clearing their throat. Other than that, I found the language clear and engaging.

Overall, I liked this beginning, and I liked Jack. The thing I want to see most of all – in the opening paragraphs or immediately after this passage – is a clarification of the setting.

Thanks for sharing your work with us, Em! Be sure to stop by Mainewords to get Marcy Hatch’s take on this same passage – and come back again on Monday to see the third installment of First Impressions this month.