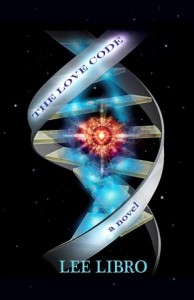 I’m opening First Impressions for July with the beginning of a YA Dystopian Series – The Love Code by Lee Libro (which has the most awesome cover, doesn’t it?)

Can a single moment, an action or inaction, determine your character? Can it become forever embedded in your destiny like a string of DNA defining who or what you are?

For a long time I didn’t think so. It was all in the DNA. But now, along with genetics, I know that moments of failure or success are just like dominant and recessive genes working internally to fight it out to the end. If we aren’t aware of this, we can be twisted against the grain of our true nature.

Alongside other GeniSom scientists, I’ve worked with these principles in the GMO labs cultivating the super wheat 30 that can nourish a nation from only a one-pound bag, cows with the protein content of elephants, and flowers that can inebriate men and women. But that one moment in time where you don’t even know that you, as an organism, are being shaped, a punch in the eye or a pat on the back is just as much a factor as the rest of these principles. Behavioral science. That’s how I was made, and yet I never figured it out. As brilliant a scientist as I was groomed to be, I never realized that I myself am the result of a manipulated recombinant cultivation.

The single-most important of these moments was my failure when I was still a child. The thing I failed to do should have been a simple task. In light of our hardships, I should have put blinders on, and as the old Nike ad said, been able to “just do it.”

I could have made the task a simple aversion from our normal routine. Ma and I had finished our work early and we’d gone to run an errand. We were walking along the road leading along the outer perimeter of our Sector. I always liked that end of the Farmmune because you could get a glimpse of what lay beyond the barbed wire fences, the golden hills to the west of Salinas Valley, our former home.

I like this intriguing opening and the juxtaposition of genetics versus experiences for the shaping of character. It sets up the conflict in the book immediately, even though we don’t know the particulars yet.

I think the first page could use a little tightening of the narration. For example the first 3 sentences of the second paragraph might run more smoothly as:

But that one moment in time where you don’t even know that you, as an organism, are being shaped, a punch in the eye or a pat on the back is just as much a factor as the rest of these principles. (I really like this idea, but I’m not sure what principles are being referred to. There are no principles mentioned in the prior sentence.)

The single-most important of these moments was my failure when I was still a child. (How about “was a failure from my childhood.”)

I would also say “In light of our family’s hardships” to clarify the plural pronoun “our” and change “aversion” to “diversion” – because I think that is what Lee meant.

Thanks, Lee, for sharing your work with us! And who designed that gorgeous cover?? You can find Lee at her blog – and also check out her published work Swimming with Wings, set in Portland, Maine. Marcy Hatch will also be critiquing this page at her blog, Mainewords.