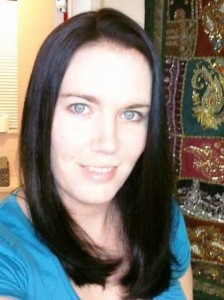 Our third First Impressions post for August comes from Sarah Nicolas. This is the first page of her current WIP, Dragons Are People Too – a YA urban fantasy about a teenage weredragon operative for the US government.
Well, crap. Mission Intelligence got it wrong. Again.
I mean, seriously? Heat sensors? When your operatives have a core body temperature of 142 degrees, that should be the first thing you check for. I daydream about ripping Simon a new one as I scale up the three stories of crumbling stone.

So now I cling to the east stone wall of the Lebanese embassy in DC with a diplomatic document pouch hanging from my belt.

I am overly conscious of the two security cameras aimed at my back, despite the full-body black catsuit with matching ski-mask that Draconic Intelligence Command (or, as I liked to call it, DIC) requires me to wear. Sirens blare, telling me security already knows we are here, but I still can’t let them see my face. And, more importantly, I can’t let them see me change.

Beside me, Wallace scrabbles, then loses his balance and falls twenty feet to the ground, hitting the wall at least twice in the process. Rookie. His breath comes fast, but he is uninjured. He could probably fall from three times that height without a scratch.

“Kitty.” Even his whisper has a British accent. He lies sprawled on the immaculate lawn of the Embassy and slowly makes his way to his feet. “I can’t make it without changing.”

“No!” I yell, then catch myself and lower my voice to something more like a hiss. “Absolutely not. Do you have any idea how many cameras are on you right now?”

All right, the first thing I have to say is that a weredragon named Kitty makes me giggle. It’s cute! As is the fact that Kitty calls her command organization DIC. (I assume it’s her opinion of them as well as an acronym.)
I wasn’t quite sure about the reference to heat sensors at first, but I think it means the Lebanese embassy is equipped with them, and they were immediately tripped by the presence of the two operatives – whose temperature runs hot even in human form.
Kitty and Wallace have obviously caught red-handed, climbing up the side of the embassy. They’ve been spotted by cameras, too – which seem unrelated to the heat sensors. Didn’t anyone scope out the cameras in advance?
The writing is smooth, and Kitty’s voice is clear. The author has raised my curiosity about the mission, the abilities of these two operatives, and if she’s already on camera, how she plans to escape without showing her face or her shape-shifting. Those are things I expect to be answered in the rest of the chapter.
The only thing that bothered me on the first page was how they were caught by cameras as well as heat sensors. How could DIC not have known the security cameras were there, recording their operatives? If that question is going to be answered in the story ahead, then no worries! Otherwise, it seems odd to me.
Thanks, Sarah, for sharing your first page! Readers – please chime in with your thoughts! You can find Sarah at her website or on Twitter. Don’t forget to stop by Mainewords to read Marcy’s critique of this page, as well.