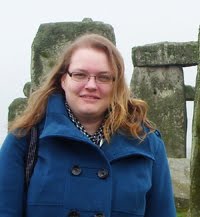 Today is the second installment of my new monthly feature – First Impressions. Marcy Hatch of Mainewords and I will be giving feedback on the first page of a YA Paranormal WIP by Carolin Seidenkranz, whom you can find at her blog, A Little Bit of Everything.

Carolin opens with this paragraph:

Dried mud tugged on her skin as she flexed her cold fingers. Brown coated both of her hands, dulling the vibrant purple on her fingernails. As she lifted her head, pain exploded in her temple and all the way into her jaw. She groaned and let her head drop back into the cool earth.

Immediately I get a vivid and compelling picture of someone in great trouble, although I don’t know yet what happened to her. The “vibrant purple on her fingernails” suggests nail polish, and therefore a modern time period. This passage is followed by a description of her surroundings and her growing sense of where she is. I really liked this tantalizing bit of information:

The overwhelming scent of smoke filled her nostrils. It took her a moment to realize that it came from her hair and that little bits of ashes had caught in it.

There’s been some sort of fire, and I get the feeling our character has passed out after escaping it. Just an editing note here: That last sentence uses the word “it” three times, to reference three different things. I’d rephrase a bit.

Next, the girl staggers to her feet with difficulty, and we realize she is still in great danger:

She steadied herself on her feet after the third try.
Shouts rang out from behind her.
“Elle est vivante!”
“Kill her.”
“Ne la laisse pas sortir!”
“Bring her back.”
Showing that she was alive might not have been one of her best laid plans.

I was immediately intrigued by the use of two languages. Where is she? I wondered. It could be Canada, I suppose – but the mix of languages definitely caught my attention. Who are these people? Why are they chasing/hunting her? Why do they want to kill her – and what was on fire?

I would replace the word “showing” in the last line with something stronger, such as “revealing.” Also, my rudimentary French suggests that the sequence of shouts actually says:

She’s alive.
Kill her.
Don’t let her get away.
Bring her back.

When translated, it’s a bit simplistic, and Carolin might want to whet our interest with something more mysterious – something more complex and puzzling. On the other hand, the words are certainly threatening enough, and if these people are running and shouting, they’re not going to waste breath on a lot of words. So, maybe it’s better the way it is.

Overall, the first page grabs my attention. A girl in danger – being chased by bilingual people who want her dead – a fire – These things raise a lot of questions in my mind. Is she a witch? Were they trying to burn her at the stake? In modern day Canada? I know some of my conclusions are probably wrong, but I would definitely want to keep reading to find out more!

Be sure to stop by Mainewords to see Marcy’s first impression of Carolin’s work!

As of today, there is 1 more spot for First Impressions open in April! (Edited Saturday, 3/5/11) Paste your first page into an email to dksalerni@gmail.com with First Impressions in the subject line — then hit SEND before you have second thoughts! 😀