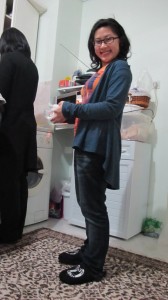 Today’s First Impressions participant is Samantha Cheh from Malaysia, whom you can find at her blog Secret Doorways. Samantha’s story (as yet unnamed) is a dark retelling of Rapunzel.

Her first page begins with a prologue:

There hadn’t been many things that should have been possible.

Like it should not have been possible for the barbarians to the north to attack the Fortress of Chamar and get away with it – it was, after all, considered central to the near impenetrable defense of Selandra, a country of rocky mountains and blistering winters. It should also not have been possible for the witches of St. Midlet to kill the mighty court sorcerer who cast spells for the royal family but it happened anyway.

I was torn, contemplating this prologue. My first thought was that it might be better to avoid starting with a historic summary and jump right into the telling of the story itself. However, I did like Samantha’s approach – that all these things should not have happened. It intrigued me and set the tone for a world in which the impossible happens anyway. The prologue only lasts a couple more paragraphs, and it paints a picture of a very dark setting.

Then, she brings in the main character:

The first thing I ever remembered was Gothel’s hands, sharp like eagle talons though less beautiful, cutting into my skin as she carried me down the steps into the bright sunlight. It would have been a lovely thing to remember if she had not taken me to see the great Chernabog who sat proudly amongst the ruined statues of her garden.

The great beast, all black and purple scales and gold eyes that made you nauseous with fear, had stared down at me like I was a tiny twig that would be easily broken. I suppose that now that I think of it, I was easily just that; one stroke of his four feet claws and I would be nothing but decaying flesh and spilt blood.

“That, my dear Rapunzel, is what awaits you should you ever try and escape.”

Now, this I liked very much – excepting only the comparison of the witch’s hands to talons, because I confused Gothel briefly with the dragon and ended up re-reading the passage to understand it better. (Not something you want happening on your first page.)

I really liked Rapunzel’s long-lasting impression of this event:

I, four years at the time, stuffed my fist into my mouth to muffle the tears I could not stop.

Perhaps it was just as well that I was taught with such cruelty at such a young age – though I never viewed it as cruelty then. I figured that the rest of the world was like that, flowers snapping at you for trotting all over their petals, insects biting you with their pincers and birds squawking ugly sounds in your face.

The world was simply that way.

What a sad, tragic view of the world for this poor, captive four-year old! And of course we know that Rapunzel will spend long years under the dominion of this cruel witch and our hearts hurt for her isolation and her cynicism. After reading this over several times, I have to recommend that Samantha consider eliminating the prologue (even though I liked it) and start with Rapunzel’s narrative. Although the prologue has a certain flair, Rapunzel’s narrative has a voice, and that is always the best way to hook your reader.

Be sure to check out Marcy Hatch’s critique of this same page on her blog, Mainewords.