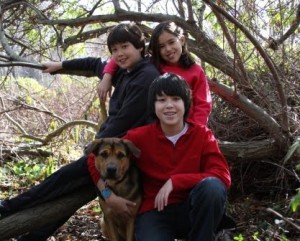 The final First Impression this month is from an eighth grade student – not a former student of mine, but a friend of my daughter Gabbey. From what I’ve seen, Dylan is already highly committed to his writing. He manages a wiki for seventh and eighth grade writers at his school to post their work and get feedback.

This is the opening page of Dylan’s work, Liberty7:

Vanastia is in total chaos—and by total, I mean armed “guards” patrolling streets at all times of the day, regular violent changes of power, and corrupt government leaders.

The worst one is the government’s military leader—Charles Ventur Bronan. An odd man to begin with. Very paranoid—which I guess could be justified. He pretty much orders peoples’ deaths every day. Eventually someone is going to get him.

He has, “Civil Guards” as he calls them—always armed, untrained but just too happy to shoot you dead with their supplied guns. They’re all goons, mindless followers of all his malicious deeds. People talk about the things that he does in secret, and as soon as Bronan’s guards walk in, everyone is silent.

Of course the government covers all these cruelties up—this one’s a weapon malfunction, this one’s a freak accident. But nobody believes them. They government guarantees they’re just there to keep us safe. But why do they need full-automatic guns in public places? Do they really expect us to believe we’re going to get attacked in the middle of a grocery store?

The worst part of the guards is there punishments. If they hear you say anything against any government official, they beat you. Such was the case as I walked down the street to the market square where numerous vendors sold their goods. Two guards approached an elderly man, cursing at him as loud as they could. Their words where were law. The first of the two seized the man as he turned to flee and held him firmly in place. The man whimpered.

The second guard grabbed the man’s left arm and twisted it behind his back. A loud crack resonated through the square and the old man moaned. Everyone was silent. Slowly I backed out of the gruesome scene and back to the street I had just arrived from. The Civil Guard proceeded to snatch the man’s other hand and twist it behind his back. There was another crack and blood stained the man’s shirt as the soldiers pushed him to the ground and left him to bleed out.

I wanted to help him—and under normal circumstance I would. I had done so several times before. But the Civil Guards would probably gun me down. Oh, yes I had caused trouble with them, and they all knew my face well.

My first thought while reading this passage was that I didn’t know who was speaking until the bottom of the page, when the narrator sees the old man beaten up. This is my biggest suggestion for Dylan: move this to the beginning and open the story with it.

Dylan has developed a great voice for his main character, so let’s meet him in the opening paragraph. I think the story should open with the main character walking to market and witnessing this event. He wants to intervene, but he can’t, because the guards know his face. Then, we can hear about Charles Ventur Bronan and his cruel regime.

By that time, the reader will be anxious to know more about the main character, whose snarky and sarcastic voice has carried us through this introduction – this person who would have helped the old man under “normal circumstances” but cannot help him today.

I also have to say that with Dylan showing this much talent for voice and style in eighth grade, I can’t wait to see what he produces in the future!

Be sure to stop by Marcy Hatch’s Mainewords to see her critique of the same piece. If you’re interested in participating in First Impressions in June, see the information on the sidebar!