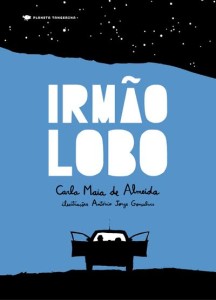 Our first submission for November’s First Impressions is a little different than anything we’ve done before. It comes from author Lyn Miller-Lachmann who, along with writing fiction of her own, is a translator of children’s books and other materials from Portuguese to English. She’s applying for a grant to translate a novel for older middle grade readers by the Portuguese author and journalist Carla Maia de Almeida titled Irmão Lobo (Brother Wolf).

She’s seeking feedback on the first page, but unlike other submissions we have seen in the past, she’s limited in how much she can change the original text. Instead of focusing on content, she’s asking us to focus on the voice and language, hoping to appeal to both the grant committee and the ultimate tween readers of the book.

Irmão Lobo/Brother Wolf is a contemporary realistic novel. It would be considered upper MG by American standards, although it is classified as YA in Portugal.

I once believed I was madly in love with Kalkitos. But that couldn’t be, because I was eight years old at the time and Kalkitos was the same age as Fossil, my much-older brother. He could have almost been my father, and something about it didn’t seem right. Actually, a lot of things didn’t seem right.

First of all, according to Blanche, I was the one born “out of time.” I began to believe this before I could put the feeling into words. I’m fifteen now and almost ready to start my own life, but I still don’t understand all the things that happened to me.

When I was eight years old, time was the microwave oven’s red numbers, always changing and blinking in the dark kitchen.

Time was Blanche running around like a crazed chicken, beginning at daybreak when she woke me and helped me get ready for school. She would glance at her cellphone and say, We don’t have time right now. We don’t have time. She’d keep running throughout breakfast, leaving crumbs of toast all over the floor like Hansel and Gretel. The crumbs never led us to a house of chocolate, and the next day they were sucked up by the vacuum cleaner.

Cold, rain, sunshine—those were the seasons of time. Jackets, boots, hats, gloves, scarves, sandals, t-shirts, shorts—all ways of dressing for the seasons. I understood. It was easy to figure out.

The same way, when Grizzly Bear sat on the sofa in front of the television and said between clenched teeth, “We are living in ungovernable times,” I knew whether this was good or bad by the way he changed the channel. Bored, zap. Annoyed, zap, zap. Enraged or worse, zap, zap, zap.

Now, I know. I wasn’t born out of time. I simply didn’t understand.

Because in the end, I went to school like the other kids, I wore sandals in summer and a hat when it turned bitter cold. I had a home, like all the kids. In this home lived Blanche, Grizzly Bear, Fossil, and Miss Kitty—my family. My parents and my older brother and sister. It wasn’t possible that they all lived in time and I lived outside of time.

But there were things that didn’t seem right.

Okay, this is a tricky task because Lyn has to keep the content of the first page true to the original book while making it work for an English-speaking audience. There were several things in the opening two paragraphs that stood out to me.

The first thing that struck me was the last line of the first paragraph. Actually, a lot of things didn’t seem right. On my first reading, I thought it referred to the relationship between the narrator and Kalkitos, which brought all kinds of things to mind about what might not “seem right” between an older teenage boy and an eight-year-old girl. If the real meaning is that a lot of things about her life in general didn’t seem right, perhaps it should be in a separate paragraph and actually include the words “about my life.” Or if, in fact, there was something inappropriate about her relationship with Kalkitos, I’d like that to be more clear.

And this sentence had two parts that bothered me. I’m fifteen now and almost ready to start my own life, but I still don’t understand all the things that happened to me. Are fifteen-year-olds in Portugal ready to start their own life? The most we ask of American fifteen-year-olds is that they (depending on the state) start learning to drive and perhaps begin to think about what they want to study in college.  Thinking ahead to the rest of their life? Yes. Starting their own lives? Not really. And then there’s the second half of the sentence: I still don’t understand all the things that happened to me. I know the author doesn’t want to give away spoilers, but can “all the things” be partially defined or at least contained in a time frame? From the link Lyn provided to a review of this book on her website, I suspect the narrator is talking about a specific event that happened to her when she was eight. I just don’t feel an urgency from the the phrase “all the things” and something more ominous might help.

The idea of being born “out of time” is interesting, and I wonder if the narrator means that she was wise beyond her years – or as we might say here in America: “Eight going on thirty.” But the hints on this page leave me confused about whether something happened between her and the aforementioned Kalkitos, or if “all the things” refers to family issues or something else entirely.

After that, the narrative settles into an engaging description of what “time” means to an eight-year-old child and her family dynamics. Blanche is vividly portrayed, and calling the father Grizzly Bear says a lot about him. I wonder why she calls her brother Fossil, her sister Miss Kitty, and her mother by her first name.

Readers, what do you think? Lyn, thanks for sharing your page with us and good luck on your grant proposal. I hope we helped you. Marcy and Krystalyn will have feedback on their blogs. You can also find Lyn’s review of Irmão Lobo HERE and learn more about Lyn as an author HERE. We’ll be back on Wednesday with another First Impressions post.