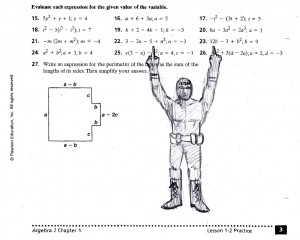 Garrett Vander Leun is opening First Impressions this month with the first page of  COWARDS AND CAPES, a YA novel combining superheroes and real world history.

There are consequences for breaking a supervillain’s window.

“What?” Charlie had already moved on.

“You just tossed a newspaper through the window of that house!”

“I what?” Charlie’s big face recoiled into his neck meat. “No I didn’t.”

Once a liar, always a liar. On the day they’d first met, Glenn caught Charlie drawing a picture of Golem inside his math book. His black leather costume, the signature aleph engraved on the forehead of his cowl, and two middle fingers poking right through a set of algebra problems. It was crude, vulgar and completely illegal.

Glenn had tried reminding the brazen artist to maybe not draw a Cape in public. And Charlie, being Charlie, whipped around with a reply. I’ll tell you what’s illegal – me being best friends with Golem and him teaching me fifty-seven different ways to shut your fucking spaghetti hole for good.

Which was a pretty stupid reply considering the Capes had been dead for decades. Controlling the urge to tattle on the well-fed liar, Glenn whispered something back. Fine, he’d said, but I’m a Cape Chaser, too – and for your information, I hate spaghetti.

Glenn squinted at the house. “Just go deal with it, Charlie.”

“Deal with what though? Seriously, nothing happened.”

“I heard it break, or whatever.” Glenn could hear a beetle break wind in the quiet of their morning paper route. Everyone said that if the Soviets were going to launch again – and they were definitely ready to do it again – then they’d do it in the dark. Everyone who was anyone stayed inside until the sun came up.

“Look, I’m sure whoever lives there gets it. Accidents fucking happen.”

Charlie’s constant cursing made Glenn twitch with itches. Sure accidents frigging happened, but that was not an accident. “You did like, you…” He brought his hand back behind his head to show Charlie how hard he’d tossed the newspaper. “You chucked it – sure as ’64!”

God, he sounded like one of his teachers. I told you kids we had a test today, sure as ’64! It had almost become a joke, as throwaway as two digits in a phone number or a street address. 1964 was the joke with an endless punchline.

First the Soviets launched, then the Capes died stopped it and that caused a worldwide blackout. Almost two million people died and all kinds of industries along with it. Music was gone, the film industry expired and the general business of being happy was flat-out extinct.

I found this entertaining and intriguing, and at this point I would definitely turn the page to read more! I especially like the dialogue between the boys.

That’s not to say I can’t suggest some tweaking. For instance: On the day they’d first met, Glenn caught Charlie drawing a picture of Golem inside his math book. His black leather costume, the signature aleph engraved on the forehead of his cowl, and two middle fingers poking right through a set of algebra problems. I would stick to the past perfect tense and say Glenn had caught Charlie, and I would also replace the period with a colon or an em-dash to remove the sentence fragment that follows.

As for here: Controlling the urge to tattle on the well-fed liar – was Glenn really considering tattling to a teacher? Because it doesn’t seem like it. And well-fed suggests fat, so if Charlie looks like a threat, would bulky or hulking be a more apt description?

It took me a couple reads to get the connection between Glenn hearing a beetle break wind and the Soviets launching. Is it because everyone is cowering in their homes and the streets are deadly quiet? Glenn and Charlie are out. Does this mean they don’t count among the “everyone who was anyone?”

Finally, while I definitely want to know more about what happened in ’64, I don’t think I want to see it jammed into that one little paragraph. It packs too much into three sentences, jumping from Soviets to Capes (superheroes?) to a blackout and the death of music. If it was a mini-apocalypse, should music and film industries be the first things mentioned – as if they are more important than anything else? I suggest picking just one aspect of ’64 to mention here. Make it tantalizing. Force us to read on to learn more about what happened and how that has impacted Glenn’s world.

Thanks, Garrett for sharing COWARDS AND CAPES! Readers, any comments? Don’t forget to check out Marcy’s critique of the same page at Mainewords, and you can find Garrett at his website, Monster Town.

There will be two more First Impressions next week – so come back Monday and in the meantime, Happy Fourth of July!