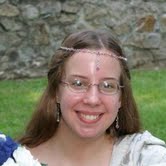 Happy 2012, everyone!  Today I’m bringing you a lot of firsts – the first First Impression of the new year and the first page of our first repeat customer!  Nicole Zoltack is sharing the prologue for her YA fantasy novel, CRYSTAL’S MAGIC.  It was her NaNo project for 2011.

Marian Wynter rubbed her arms together as the threadbare coat she wore did little to protect her from the harshness of the storm’s raging winds. Lightning flashed, casting eerie shadows across her path. Thunder roared like an angry lioness. Sleet slashed across her cheeks, mixing with the tears that streamed down her face.

She desperately wanted nothing more than to snuggle with her husband in front of a roaring fire, far away from the storm.
Well, that wasn’t completely true. There was one thing she wanted more than that.
Lightning struck a tree a few feet in front of her. She slipped on the mud, and rocks cut into her hands as she braced herself from the fall.
Daniel didn’t know where she was going tonight, and she didn’t know for certain that he would approve. She thought he would, though. He was as desperate as she was.
She hurried through the rocky terrain. A small cottage with lights flickering through the windows offered both refuge from the storm as well as her salvation.
The wind whipped around more fiercely the closer she approached the cottage. She stumbled forward and couldn’t help but think that the storm was unnatural.
Marian raised her hand to knock on the door but before she touched the wooden surface, the lights went out in the cottage. Her courage left her then, and she even took a step backward.
No. She’d come too far to leave now.
She knocked on the door—five short taps followed by two quick ones, just as she had been told to.
Nothing. No movement within the cottage, no sound other than thunder and the pounding of sleet against stone.
She wanted to try the knock again, but she had been told specifically not to do that.
There was nothing she could do but wait.
The prologue puts me in mind of a fairy tale beginning, with a desperate woman seeking magical assistance from the local witch or wise woman.  The standard thing would be that she’s barren and wants to have a child, although why that would drive her out in a storm like this, I’m not sure. Perhaps her need is more dire and urgent than that.
I think the first line could be stronger.  Rather than having Marian Wynter rub her arms in the wind, I wonder if Nicole could start us off with her mental state – linking her emotional turmoil to the storm and giving us a glimpse inside her head.  This would be more effective than mentioning tears, I think, which practically speaking, would quickly be wiped away by stinging sleet.
I notice the passage is composed mostly of very short paragraphs, consisting of only one or two sentences.  Also, most of the sentences are structured in a similar fashion, beginning with the subject of the sentence.  I wanted some variety as I read – longer and shorter paragraphs, sentences that began with dependent clauses, prepositional phrases, or even the dreaded adverb, just to break up the rhythm.  The way it’s written, it seems too straightforward when the situation calls for something more mysterious, elemental, and wild.  I’d like to feel Marian’s desperation through the style of the narrative.
I like the light going out in the cottage, the special knock, and the warning not to knock again even if there’s no response.  This would make me turn the page, to see if the door will open for her – but I’d still like to feel Marian’s desperation/desire/fear more strongly throughout the passage so that I also turn the page to find out what she wants … and whether or not she’s going to get it.
Nicole, thanks for sharing your NaNo novel with us, and good luck to you as you revise it and take it forward!  Please stop by Mainewords to read Marcy Hatch’s critique, and say hello to Nicole at her website.