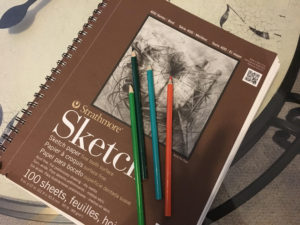 This is the last First Impressions post for 2016! Our author is Jasmine, a middle school student, and this is the first page of her science fiction novel, CURIOSITY KILLS.

The air was light and crisp, the wind lightly flowing through the trees, gently shaking the leaves which slowly moved their way down to the soft dirt ground. The mood slowly departed to let the sun take over the sky. Purples, pinks, oranges and reds all painted the sky like a brand new canvas waiting to be framed. Axel sat patiently on his smooth wooden windowsill seat. He waited for the perfect time for the sky to set in its place.

“Bingo.” With his notebook in hand, he very gently and gracefully colored a picture of the sky in all its beauty. He grabbed all different kinds of colors form the new pencil set he bought from the store. He had finally saved up enough to buy the best pencils in town. Many of the townspeople would tell him that it was a waste to buy pencils when he could spend his money on something more useful and important. He was very talented, though many people did not approve. He didn’t listen, though. He made quite a good profit by selling all of his artwork, proving to people that it wasn’t a waste. Despite always being busy helping his mother around the house, he usually found time to relax and draw.

After a while, Axel finished his drawing, satisfied with his work. He sat at his windowsill for a little while longer, watching the sun climb up the sky and the white, puffy clouds roll in. He then stood up, put his notebook on the seat, and walked over to his mirror. He was quite the handsome boy, just like his father. His raven black hair was slicked back and curling a bit on the ends. Crystal blue eyes, like his mother’s, shone like large diamonds on his white pale face. He had broad shoulders and a strong voice. A strong voice he faked 80 percent of the time only to impress the girls his age in the town.

Axel ran his bony fingers through his hair, making it messier than it already was. Even though he went to bed pretty early the previous night, he was still exhausted. The clanking of pots and pans, and the sound of running water could be heard coming from their large marble-based kitchen. The delicious smell of pancakes and bacon came wafting up the stairs and into his bedroom.

Although there’s no hint of science fiction yet, I wonder if Axel’s artistic talent will play a role in the speculative elements of this story.  Since Jasmine chooses to start the book with Axel sketching the sky, I assume his artwork is going to be important. I can’t wait to find out how!

This passage is very visual, and the focus is on his drawing. The description is strong but could benefit from stripping out some of the adjectives and adverbs. Me, I put tons of adjectives and adverbs into my sentences when I first write them. Then I spend the rest of my time taking them out. Instead of using multiple describers in one sentence, pick the perfect describing word and use that instead. Figurative language (similes, personification, etc.) are also good substitutes for ordinary adjectives. (Ex: … watching the sun climb up the sky and the cotton candy clouds roll in.)

This book is written in close third person, following Axel and Axel’s thoughts. Therefore, try to avoid putting things in the narrative that Axel wouldn’t be thinking about – like his kitchen counters being made of marble. Another example is when the narrative says that townspeople wouldn’t approve of him wasting his money on fancy pencils or spending time on his hobby. An actual memory of someone commenting on his purchase would cover the same information and seem more natural to his thought process. It would also give you the opportunity to share a reason for their disapproval in the dialogue. (I wonder what their problem is?!)

Likewise, watch out for describing Axel too much. You can get away with that more in third person omniscient, but in close third person you want to only use descriptions that would naturally cross Axel’s mind. He might be looking into the mirror to fix his hair or check for pimples or admire himself. But he probably won’t be comparing his hair color to ravens or his eye color to crystals or noticing that his fingers are bony. Remember, it’s okay not to completely describe him on page one.

Readers, do you have anything to add?

Jasmine, thanks for being brave enough to share your first page with us. I hope you find these tips useful! Good luck with your story and keep writing! Don’t forget to read feedback from Marcy and Krystalyn!