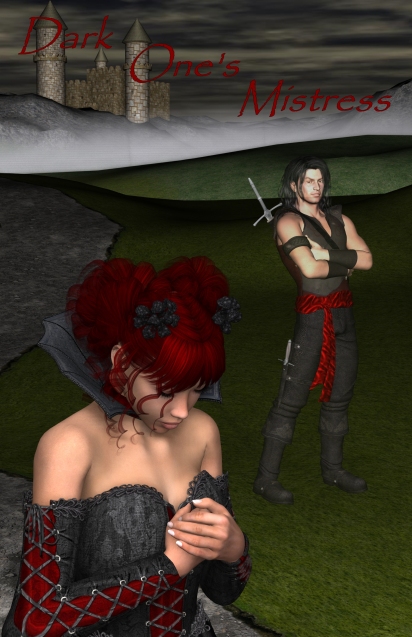 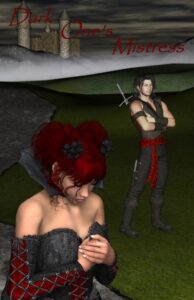 Today for First Impressions, Aldrea Alien is sharing her first page of DARK ONE’S MISTRESS, an adult fantasy.
“Clarabelle!” The cry rang out across the street, scattering the pigeons resting atop the roofs and sending the nearby cats into a fit of hissing as they scampered for cover.
Clara halted on the edge of the street, her face burning as the echo of her mother’s manly bellow continued. All around her, men and women paused in their daily business. The street gained an eerie silence. In the past, she’d heard worldlier folk boast that such deathly quiet could only be heard here in Everdark.
Then someone coughed, another person sneezed, and the sounds flooded back. The hum of talk. The clink of coins. A few turned to stare at her, the young woman in question, but mostly, the irate cry seemed to be forgotten.
A sigh huffed through her lips. Why does she have to scream like that? She contented herself with the roll of her eyes, wishing the heat in her cheeks would fade. It wasn’t as if she was some small child. She knew her duties well. Knew the streets even better.
She shuffled her burden: bread, cheese, a skin of goat’s milk and a tiny, dog-eared book on the world beyond. The last was for herself. Literally titled The World Beyond. Beyond what, she didn’t know, but it sounded intriguing.
In the pit of her stomach, Clara knew concern hadn’t driven her mother’s voice. She’d taken too long, pure and simple. It wasn’t her fault the baker’s son had gone missing was it now? She’ll find some way to blame it on me.
Knowing her mother, she’d have expected Clara to come running back. Oh yes, my burden is ever so light. And if she fell and ruined it all? Why she’d be treated to one of her mother’s clips over the ear. Or worse, she could twist her ankle on the uneven stones that dared to be called a road. Nature could’ve made a better surface than this. She could’ve sworn she’d heard her mother saying they were repairing the roads.
Or had she meant the Road?
Her gaze lifted to the shadowy bulk of the citadel perched atop Mount Winding.
I like the way this opening drops us into a rich setting with conflict and characterization cleverly introduced by that irate bellow and Clara’s reaction to it.  But I can make some suggestions for tweaking the narrative and getting more out of it.
The street gained an eerie silence. In the past, she’d heard worldlier folk boast that such deathly quiet could only be heard here in Everdark.  I don’t think the verb gained is the best one for that sentence, and I didn’t get a sense of “deathly quiet” – only “shocked quiet” as the inhabitants of the street reacted to Clara’s mother’s unladylike bellowing.  It was amusing more than eerie.
The book on the world beyond – is that something Clara carries with her all the time, or is it something she purchased today? I get the idea that the book might be important – or the fact that Clara carries books is important (I’m thinking Belle in Disney’s Beauty and the Beast) – so let’s get that clarified right away. And if she was held up in her errands because the baker’s son was missing, let’s get that clarified as well. Maybe mention she was lucky to get the bread at all, considering the turmoil at the bakery … or something like that.
In the sentence Knowing her mother, she’d have expected Clara to come running back, the action of knowing is assigned to the subject of the sentence – she – but she refers to the mother and Clara is the one doing the knowing.  So this needs to be rephrased.
The end of the page segues into a reference to the Road (capital letter), the citadel, and Mount Winding.  All very intriguing, and I’d like to read more, but I feel like I’ve been rushed to this point.  On this first page alone, I’ve got Clara in conflict with her mother, deathly silences in Everdark, a book titled The World Beyond, a missing baker’s son, and now a citadel atop a mountain and a road that gets a significant capital letter.  It may be too much all at once.  I’d like to see this page slow down and describe things in a leisurely but sly way, building our curiosity bit by bit and crooking a finger to invite us to turn the page. Reserve some of the mysterious elements I list above for the rest of the chapter.
What do readers think?
Thank you, Aldrea for sharing your first page. I hope the comments helped!  I invite my readers to visit Aldrea at her blog Thardrandian Thoughts, and stop by Marcy Hatch’s blog Mainewords to see her thoughts on the same page.