First Impressions: GERALD AND THE AMULET OF ZONRACH 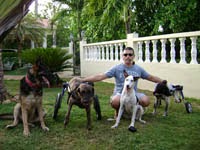 Our third submission for First Impressions is an upper MG humorous fantasy by Carl Hackman, GERALD AND THE AMULET OF ZONRACH.
A flash of blinding blue light filled the room, followed by a billowing cloud of dark, acrid smoke.
“Oops…”
Now this is not the sound you want to hear from a wizard, especially a short one and Gerald was only five feet tall, meaning he wasn’t very good yet.  He had dreams of exceeding six feet but only the best wizards in the land ever reached those dizzying heights.
A rumble under his feet, steadily increased in strength until the floor beneath him rolled like a ship in a storm.  Trying to stay upright, he staggered to the window at the front of his weather-beaten cottage.  The small hill supposed to be growing outside – to improve the view – failed to materialize.  But the cotton ball clouds normally gently drifting on the warm summer breeze were fairly whizzing by.  The sight of villagers clinging to structures for dear life deepened his frown of consternation.  His flint grey eyes nearly popped out of his head when the village herbalist flew past his window and, as he followed her progress across the green, he spotted Lord Moleheart hanging onto a tree like a flag in a gale.
“Kack!” said Gerald.
“Gerald!  What have you done?” shouted Colin, dodging flying crockery as he made his way across the room.
“Hmm?” replied Gerald. The point of his especially tall and illegally obtained wizard’s hat twitched, as his bushy eyebrows bumped against the brim in a tattoo akin to a drum roll.
Colin, who had only been posted to Molehaven as Gerald’s assistant two weeks ago, very rarely shouted.  If he could get away with it he even whispered his spells.  So, shouting indicated Gerald had been especially naughty and confirmation came when he shrank one inch before Colin’s eyes.
At this rate Gerald would not be a wizard much longer.  Four feet eight was the statuary minimum for all wizards.  Anything less and Gerald knew he would be back working in the fields, or shoveling horse poop until he reached the minimum height again.
“Double Kack!”
“Have you been buying words again to strengthen your spells?” said Colin.
Okay, this is really cute! I love the idea of a wizard’s height changing in relation to his competence, and the image of the villagers being blown about like pieces of litter is hysterical. When Gerald shrinks, and he worries he’ll have to return to shoveling horse poop until he regains minimum height standards for a wizard, I laughed out loud.
I think there are sentences that could use cleaning up, in terms of punctuation and word selection. The first sentence in the third paragraph is missing a comma before the second independent clause, and the first sentence in the fourth paragraph has a comma incorrectly placed between the subject of the sentence and the verb phrase. This sentence is a little too wordy: But the cotton ball clouds normally gently drifting on the warm summer breeze were fairly whizzing by. It’s a short sentence, but it still has three adverbs, three adjectives, and two –ing words — one in the subject and one in the predicate.
There’s a point-of-view switch when he shrank one inch before Colin’s eyes, because that’s the only place in the narrative we see things through Colin’s eyes. If the narrative is meant to show POV from multiple characters (and I can’t tell from just this short passage), then the switch needs to be done more carefully so readers aren’t confused. Here it would be simpler to reword the sentence.
Finally, the relationship between Colin and Gerald is a bit confusing. Colin is Gerald’s assistant, but Colin can apparently cast spells better than Gerald, even if he whispers. It’s fine that he’s shouting at Gerald in this scene, especially if he has to be heard above the wind, but referring to Gerald’s actions as naughtymakes it sound like Colin is Gerald’s superior. This could be re-worded – or, alternatively, Colin could just enter the scene and demonstrate his alarm by shouting, and the relationship between them could be explained after this little crisis is resolved.
Readers, do you have anything to add? Carl, thanks for sharing your page with us! Marcy has her own critique over at Mainewords, and you can say hello to Carl at his website.
Marcy and I will have a Special Edition of First Impressions next Monday so that Robin Hall can put the final touches on her latest manuscript before sending it to her agent – so please come back to help her!

Plus, HarperCollins gave me the green light to share my cover for THE EIGHTH DAY! I’ll be doing a special post at my blog tomorrow (Tuesday) at 4pm, as well as splashing it everywhere else I can think of. I’d love your help Facebook-sharing and re-Tweeting!