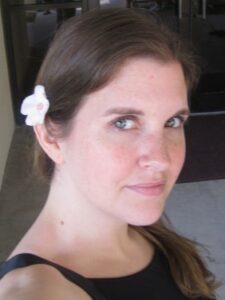 Our final First Impressions for the month of August comes from Larissa Hardesty. This is the first page of her YA Thriller, MEDITATION:
TORI
Friday 8:30pm
I’m not sure what wakes me up first, the pounding in my head, or the coolness of the concrete floor I’m lying on. A moan escapes my lips and echoes around the room. As the throbbing slows and my eyes adjust to the dim light, I take in my surroundings.
What the hell is going on? I have no idea where I am. The room is bare and completely gross, the floor covered in dust and dirt.
I place my hand flat in front of my chest and push myself to a seated position. The familiarity of the motion I use in yoga every day usually calms me, but now my head just pounds harder, and my heart pounds with it.
Where am I? I search my memory. I had finished the yoga class, and decided to walk to the musical, and then…. I don’t know. My entire body shakes with a surge of adrenaline, and my breathing speeds up.
I have to calm down and figure out where I am. I breathe in slowly through my nose, and cough when the smells of the place register. It smells like something died in here. Or lots of somethings. I try breathing through my mouth instead, but that only dulls the stench.
Shaking my head, I attempt to stand, but my legs give out. As I sit back on my heels, I try to pierce the gloom with my eyes. It makes my head throb worse, but it’s the only thing I can do right now. Tears of frustration prick my eyes, and I blink them back. Crying won’t help.
My eyes adjust and I can make out a door in the wall in front of me. I drop to the floor and crawl to it. Using the handle, I pull myself to my feet. Please open, please open. I twist the doorknob. It won’t turn.
I twist again, turning the knob back and forth. It doesn’t budge. My heart and head pulse in unison, and I feel an asthma attack starting. What’s going on?
Yanking on the handle, I yell, “Hello?”  There’s no response, so I bang on the door with my fist. “Hey!”  I press my ear to the door and listen. Not a sound.
I’m sure most readers are thinking what I’m thinking: Abduction. My first impression is that this teenage girl has been kidnapped. And that makes my heart race. We’ve all seen the news. We know what happens to abducted girls. What a terrifying beginning!
I once took an online workshop on what agents and editors look for in a first page and the consensus seemed to be that Character, Voice, and Conflict are the three things you need to nail. This page has provided the Conflict and the beginning of Voice (but just the beginning, because she’s addled and confused). What could use further development is Character, because we know very little about this girl. The reader needs to bond with her quickly because she’s been plunged into danger before the story even begins. The tension is there; all senses are engaged by the scene, but I don’t know who this MC is.
What if we skipped the waking-up part? (Many people would say that “waking up” is one of those no-no beginnings anyway.) If the page opened with the MC already awake and aware of her situation – even if it’s only been a couple minutes since she woke up – we could learn so much more in an equal number of words.
She was leaving yoga class and headed for the musical. That’s all we know about her, but if the story opens a few minutes later, she’ll probably be running though those memories in more detail trying to figure out what happened. Even if she remembers nothing else, she’ll be concocting horror stories in her head. She’s probably seen the news too. She must know what happens to kidnapped girls. If her asthma has been triggered, she’ll be feeling the symptoms of it. Is she trying to use yoga to calm herself – or is yoga ineffective in a real, terrifying situation? Has she connected the smell of death in the room to what might happen to her?
I’m curious to know what Larissa has for us on the second page of this story, and how much of that second page would be effective on the first page if the story starts five minutes later. An alert, awake, and terrified MC will share more of herself and her personality in the opening lines than one who is just regaining consciousness. What if the story opened with the locked door, the foul stench, and the asthma attack? Then, BANG – you’ve got Character, Voice, and Conflict.
Readers, what do you think? Larissa, what do you think?
Marcy Hatch has her own feedback at Mainewords. Be sure to check it out. Larissa, thanks for sharing your page with us! And if you don’t know Larissa, say hello at her blog, Larissa’s World.