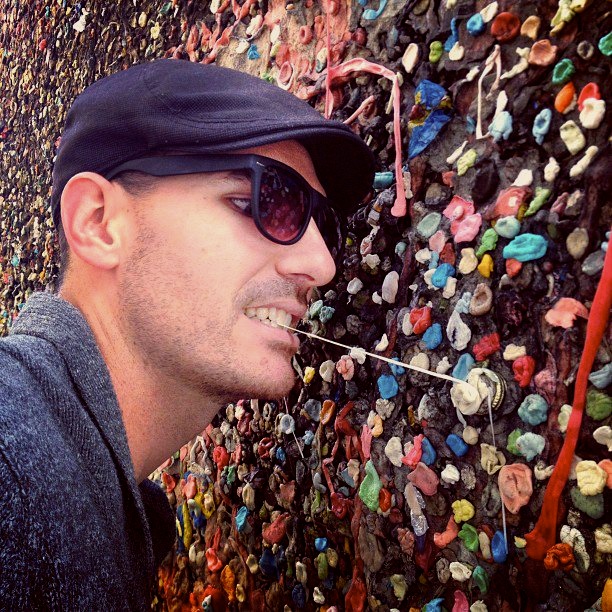 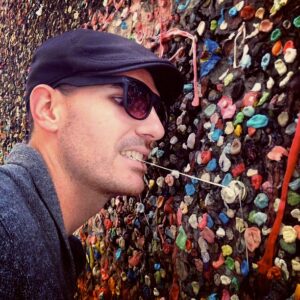 Our next First Impression comes from Garrett Vander Leun, who is sharing the first page of MONSTER TOWN, a middle grade fantasy.
Vampire, on the roof, freaking out in a beach chair.  Other kids had alarm clocks, I had my dad.
Scritch-scritch.
That was the first part, the little scoot-back.  He’d be chanting or yodeling or whatever he did while he meditated on the roof, and then the sun would sneak up on his little, grey toes.
Scritch-scritch.
That’s how I woke up every single morning.  The sound of him scooting away.  A sound like the blade of a clumsy knife screeching across a plate.  Like an idiot vampire who should have known better.
Boom!
It sounded like thunder when the sun put a little sizzle in his shorts and he fell over backwards. It shook the walls and rocked my mattress and absolutely guaranteed I was done sleeping.  I’d just lay there with my hands lumped into fists and wait for the rest to happen.  On the morning of my thirteenth birthday, the vampire jumped off my roof like a man on fire.  To be fair, he probably was.  When he sprung off the shingles, little white bits of ceiling sprinkled into my hair just like parmesan cheese on spaghetti.
Ca-runk!
He came down in the bushes outside my window and snapped and crackled his way out of anything left standing.  The way his hands fumbled along the outside wall sounded like trouble.
Again.
I shook my curls out and kicked my sheets off and reminded my legs how to walk as I pin-balled down the hallway.  I couldn’t remember if I’d left the sliding glass door open or not and those kind of things matter to vampires running away from the sun.
Ka-reesh!
The sliding door was open, but the screen door was not.  My dad dove right through it, head first.
“Congratulations, Dad – you’re on fire.  Again.”  His hands looked like candles; I wondered what kind of wish I would get if I blew them out.  Maybe I’d woosh all the other monsters I had to live with right out of existence.
“Bobby!”
The kitchen sink wasn’t too far away and the hose on the faucet might have reached.  A cup of water definitely would have.  I crossed my arms and watched the human torch dance instead.  He’d heal eventually.
My dad slapped his hands into the carpet like he was ripping into some sort of wild bongo solo and huffed and puffed through a rather lackluster ending when the fire finally went out.
“Well done, Dad.”
He’d smacked brand new black, smoldering scars into the carpet right next to dozens of crispy older ones.  He turned his head sideways to look it all over.  “It kind of looks like cheetah print.”
You know what? This is hysterical. The entire situation – a vampire on a beach chair catching fire on the roof while his son provides a fond, but slightly irritated commentary – I can’t imagine what reader wouldn’t be hooked by this.
I only have a few suggestions for tweaking. First off – starting with a sentence fragment is taking a risk that you might turn off the reader immediately, and it did confuse me a little. I think it would be easy to change. For example:  Other kids had alarm clocks; I had a vampire on the roof, freaking out in a beach chair. You could reveal the vampire is his father in the line below: Dad would be chanting or yodeling or whatever he did … This is just one suggestion. There are many ways to eliminate the fragment.
Next, do boys shake their curls out? That line made me think the narrator was a girl, but his name is Bobby. I don’t think we need a physical description of the narrator this early, and I doubt he’d think about his hair while getting out of bed to make sure his on-fire-vampire-father can enter the house. Why not just skip to: I kicked my sheets off …
My last (miniscule) thing is this: A hose on a faucet can “reach,” but a cup of water can’t. So I wouldn’t try to use that parallel verb. How about: I could at least have brought him a cup of water, but instead I crossed my arms and watched the human torch dance.
That’s it! I loved this. Readers, what do you think? Don’t forget, Marcy Hatch will be sharing her own feedback at Mainewords. You can find Garrett on Twitter, or at Douse The Lights, where he shares an online portfolio of his artwork, including character illustrations for MONSTER TOWN.