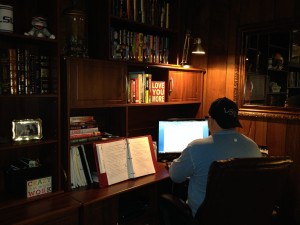 Our first submission for First Impressions in October comes from DL Hammons. This is the first page of a YA Horror novel called MOVING FEAR:

“Are those restraints really necessary?”

The orderly continued strapping the wide leather belt around the woman’s waist without a sign he heard the question. His ill-fitting uniform of matching white pants and short- sleeve shirt suffered from a terminal case of the wrinkles and did a poor job of covering his massive bulk. The laminated hospital ID clipped to his uniform pocket flapped around like a cowboy holding on for dear life atop a bucking bronco. Working without a sound, he finished with the leather girdle and then guided the woman’s listless body into the chair opposite the visitor. Only a small metal table separated the two of them.

The priest, dressed in a dark gray suit with a black clergy shirt and white clerical collar, studied the orderly. He watched without comment as the hospital employee treated the woman as a side of beef, maneuvering her roughly back and forth, oblivious to her own will.

Thus the reason for the frown on the priest’s face.

The room he had been waiting in was brightly lit, which he found odd because the intense lighting only accentuated the dust and grime. It was clear that the cleaning staff hadn’t concerned themselves with this part of the hospital for quite some time. The filth was emphasized by a musty smell of neglect and a faint hint of stale sweat and urine, which assaulted his nose and put him in a foul mood as soon as he’d entered the room. The orderly’s actions now only deepened it.

The priest had taken the seat on the far side of the table, putting the mirror covering the majority of the back wall behind him. On the wall to his immediate left rested an old metal radiator, fed by a pipe that ran along the baseboard and into the floor adjacent to the lone entrance. A table and two stiff chairs, all bolted to the concrete floor, were the only furniture in the interview room.

The woman offered no resistance throughout her man-handling, her distant eyes providing no hint that she was even aware of the orderly’s actions. Grabbing the bulky chain hanging from the rear of the belt the woman was now wearing, the hospital worker secured it with a lock to a loophole at the base of the chair. He gave it a quick yank when he was finished, jerking the woman back in her seat. Only then did he step back and look at the priest.

The first line of the story is attention-getting to be sure! I was struck by that on my first reading … several months ago. (Confession time here. I had the chance to be a beta reader on this book, so I’ve already read the whole story and think it’s a winner!)

Nevertheless, looking at this page in isolation, I feel there’s too much description of a place we’ll never be again (this room) and a person we’ll never see again (this orderly). Yes, I’m speaking from the experience of having read the whole book, but probably even readers seeing it for the first time will realize the detailed descriptions of the room and the hospital worker are delaying us from something more interesting: Why is this woman in restraints? What did she do that makes her dangerous?

I know the bleak description is meant to set the mood for this horror story, but I think that could more efficiently be accomplished with just the details of how thoroughly the woman is restrained. I would keep those sentences intact. The rest of it – the room, the slovenly appearance of the orderly – could be replaced by the conversation between the priest and the worker (which I know takes place on the next page) addressing the disparity between how small and helpless this woman looks and what she’s done.

I have a second concern. This page is from a sort of prologue to the book. I’m not one of those people who thinks all prologues are evil and must be cut. I have one of my own in The Caged Graves. However, I’m not sure a prologue is the right thing to send to an agent as sample pages in a query, specifically because it does not introduce the main character.

It may depend on what the agent wants to see. If a partial manuscript is requested – the first 3 chapters or first 50 pages – then it might be okay to include this prologue.  But if the agent’s preference is for only the first chapter or the first 5 pages, I would skip this chapter and send the next one, where the main character Knox Gidden is introduced. Readers, what do you think?

DL, thanks for sharing your page with us! You can find Marcy’s feedback at Mainewords, and DL can be found at his blog, where he hosts the world-renowned WRiTE CLUB!