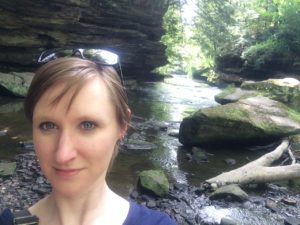 Today we have a First Impressions submission from Melissa Guthrie. This is the first page of her young adult historical fiction novel. The working title is OHIO 1863.

Henry Clemmons opened his eyes just as acid bubbled up from his stomach. He bolted upright, grabbed a pail from beside the bed, and retched into it. The room spun. Henry sprawled back into the mattress. He rolled into a ball and moaned.

On the other side of a doorway stood Lincoln Hewitt. Link, as Henry knew him, was bent over a long board made of poplar wood, dressed in the same dark pants Henry saw him in the night before. His feet were bare, stained black. His dark hair, the color of ink, was brown with sawdust. A cigarette burned between the first fingers of his right hand, the scent of tobacco heavy in the air.

“Did you sleep at all?” Henry asked. He climbed from the bed and looked down, his nakedness a stark reminder of the night before, gin in his mind and clothing lost piece by piece. He found his drawers tossed over a trunk at the end of the bed and pulled them on. He looked back to find Link watching him, a small smile on his lips which he moistened with the tip of his tongue.

Link’s eyes were his most notable feature. Never before had Henry met a person, male or female, with eyes like his. Link eyes were the color of sky after a snowstorm, cold and gray. An ash fell from the cigarette and landed dangerously close to his toes. Fire burned in Link’s eyes, sometimes bright as dawn and sometimes smoldering like embers, always burning.

“The Welk baby died last night,” Link straightened and took a drink from the tin mug that seemed permanently affixed to the middle finger of his right hand. Dark circles ringed his eyes. His shoulders were loose and slouching. He wiped sweat from his brow with the back of his arm and looked around the shop as if he were surprised to see slants of daylight coloring the workshop’s dark corners. “Pull yourself together and eat something for breakfast. The Widow up the way brought biscuits and I found some berries.”

Henry cleared his throat and attempted to moisten the inside of his mouth, as if just the thought of the widow’s dry, crumbling biscuits, produced in mass quantities, was enough to make swallowing a chore. Link brought the old woman meat and provisions from town and she repaid his efforts with biscuits best suited as doorstops. “There’s goats milk as well, if you are so inclined. Should you add the milk to the biscuit, perhaps it will be more palatable.”

“You really want me to eat, don’t you?” Henry asked.

“Can’t have you wasting away.”

I was immediately struck by the strong visual images on this first page – the play of color and light in the scene. I can visualize what this would look like on film, the “slants of daylight coloring the workshop’s dark corners” and eyes “the color of sky after a snowstorm, cold and gray.”

The one visual element that left me confused was Link “bent over a long board made of poplar wood.” What wood? Is it lying across a pair of sawhorses? This is a workshop, so perhaps he is making something with it, but he’s got a cigarette in one hand and a tin mug in the other, so he’s obviously not working on anything right this second. This could easily be clarified with a change of phrasing.

I assume the relationship between the two young men is sexual, but then, the last time I assumed that two characters on the first page of a First Impressions post were gay, I turned out to be wrong. They were just best friends. However, with phrases like “his clothing lost piece by piece” and “Link watching him, a small smile on his lips which he moistened with the tip of his tongue,” I think I’m on surer ground this time.

My last comment is that “The Welk baby died last night” comes as a non-sequitur between “Did you sleep at all?” and “Pull yourself together and eat something for breakfast.” I don’t know why the Welk baby dying is a reason for Link not to have slept. Is he making a coffin? Is that what the poplar wood is for? This makes sense, but why did he have to have the coffin ready by morning, and how did he get the news of the baby’s death in the middle of the night?

Readers, what are your thoughts? Don’t forget to check out the feedback from Krystalyn and Marcy, and you can find Melissa on Twitter. Melissa, thank you for sharing your first page with us!