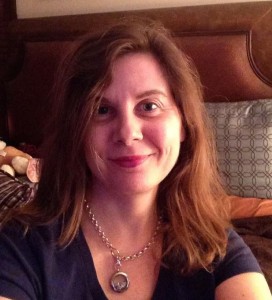 Our last First Impressions for August comes from Robin, who you might know from her blog Your Daily Dose. This is the first page of her paranormal mystery romance, OUT OF TOUCH.

After college, I ran through jobs faster than a line of cars in a McDonalds drive-through at noon.

I currently work for Brown and Bell, a small PR firm in Rockdale.  As an Assistant Publicist, I’ve learned the ins and outs of marketing and am in the running for a promotion. I’ve been here almost six months, which is the longest I have worked anywhere, and I like it.  Not incidentally, when I hit my six month employment goal I will finally move out of my mother’s house and into an apartment of my own.

I looked up and Roger Brown was standing over my desk.  My boss. “Gigi, can I see you in my office please?”

It wasn’t a question.

I followed him in and he closed the door.  He settled into his chair, cleared his throat, while his eyes darted around the room, not quite knowing where to settle. His obvious discomfort set off my internal alarm. I grasped the arms of my chair braced for what was to come. The sun bounced off a diamond cufflink on the floor.  Without considering the consequences, I picked it up.

I was swamped with a feeling of desperation and lust.  The vision unfolded revealing my co-worker, and biggest competition for the Publicist position, Bambi, half naked. Roger tore off his clothes in an effort to catch up.  When he dropped the cufflink, the connection was severed.

“….understand that Bambi is more qualified for the promotion,” he said.

Bile rose in my throat. Bambi stooped lower than I dreamed possible to beat me out of a promotion. And Roger… it disgusted me that he fell for Bambi’s obvious move to pull herself up the ladder. I shook my head in an effort to erase the picture of them together.

“I realize that this is a tough break,” Roger said, “but refusing to accept it doesn’t change anything.”

“I know this is a disappointment. “

This was more than a disappointment. This changed how I felt about Roger as a boss. As a man. As a human being.  “You and Bambi get naked and I lose out on a promotion. Unbelievable.”

I didn’t realize I spoke the words aloud until his eyes opened wide and then narrowed to slits.

“Oh, crack.” I muttered to myself. When I was a kid, and things went sideways, I said, “Holy firecracker.” Over the years it became just crack.

I wonder if this paranormal ability to see things when Gigi touches objects has anything to do with why she’s run through so many jobs. It certainly seems like it’s going to cost her this one!

I do think this page should start with Gigi being called into her office by her boss, anticipating the promotion announcement at first – then realizing that things are going “sideways,” as she says. The back story of the first two paragraphs is better off shared later. Like, after she loses this job, which is what I assume will happen next. When she’s walking out the door with her box of desk-stuff, that would be the time to reveal all those other lost jobs.

The second paragraph is in present tense, while the rest of it is in past tense. If that paragraph is cut, it takes care of the problem, but Robin should closely watch her tense in the rest of the book – as well as consider if the book would benefit from being written entirely in present tense instead of past. Some writers feel it gives more immediacy to the narrative. Me, I’m not a big fan of the present tense (although I’m trying it for the first time in something I’m playing around with.)

Also, the scene in the office feels a bit rushed. Since it’s the opening of the book and presumably the inciting incident, I think Robin can take her time … describe Roger and his office a bit, have him compliment Gigi’s work and ramble about her qualifications before getting to the point … and transition us a little more smoothly into her vision when she picks up the cufflink.

Why does she pick it up, when she knows she has this power? I would expect her to be extremely wary of triggering these events. What if the cufflink was on the chair instead of the floor? She sits on it, feels it sticking into her butt cheek, discreetly digs it out while Roger’s not looking, and discovers it’s his cufflink too late to avoid getting that x-rated vision?

Readers, what do you think? Thanks, Robin, for sharing your first page with us. Marcy will have her own critique on Mainewords, and if you don’t already know Robin, you can find her at Your Daily Dose!