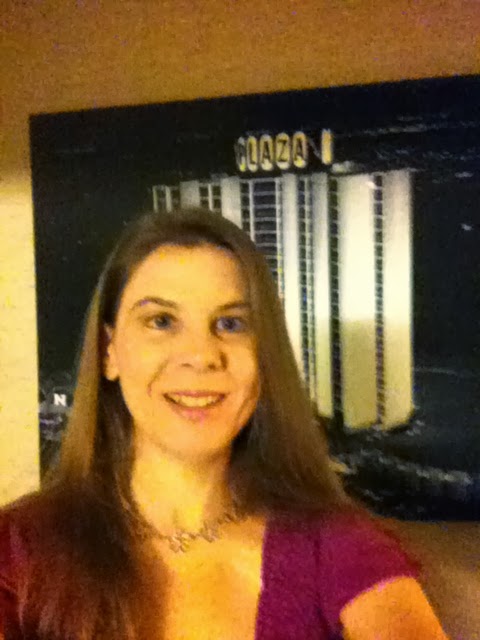 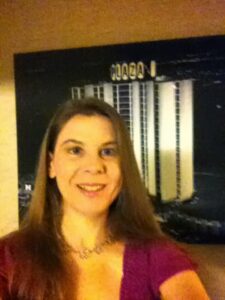 Today for First Impressions in November, we have a submission from Robin Richards. This is the first page of her Adult Paranormal Mystery/Romance, OUT OF TOUCH.
Until one Saturday morning in July I was only a mildly damaged seven year old kid living in a mostly dysfunctional house.  All of that changed when I went to the Patterson garage sale with my best friend, Franny, and her mom.
Like all self-respecting garage sale junkies, we arrived at the crack of dawn.  All of the good stuff was always gone by 7:30 a.m.  Mrs. Patterson’s house was our first stop.   We had chosen it for two reasons:  the merchandise and the gossip were known to be in abundance.  Mr. Patterson up and left Mrs. Patterson about a month ago and tongues were wagging.    Mrs. Fitzgerald’s eyes opened round as quarters when she saw the contents on the lawn.
Franny said, “Do you think there is anything left in the house?”
Mrs. Fitzgerald didn’t answer, but she hustled out of the car.  We bounded out after her.  It appeared that the house had vomited up the sum of its contents all over the yard.  I had never seen so much furniture outside of a home.  I didn’t have any money, but I still liked to look.
It was when I picked up the ivy trimmed teacup that my entire life changed forever – and I can’t say it was for the better.  A feeling of panic engulfed me and the following scene rolled out like a movie:  I  saw Mr. Patterson drink from that teacup, clutch his throat, while his face turned a mean red, and then he pitched face forward into the table and looked…dead.
The cup slipped from my hands, I started screaming, and I tripped and fell into a wheelbarrow that was parked on the grass and marked with a “For Sale” sticker.  Then it happened again…
This time the feeling was satisfaction.  But not the good kind.  It felt black and mean.  And the image of Mrs. Patterson wheeling Mr. Patterson in the wheelbarrow across the backyard to the garage popped up like I was actually there.  She took a shovel, dug a grave, put his body in it, and parked her Oldsmobile right on top.  Her car, right this minute, was sitting on top of Mr. Patterson.
That was when it sunk in that I was sprawled where his dead body used to be.   I couldn’t get out fast enough.  However, my brain and muscles were no longer working in tandem, so I just flailed around like a beached fish.  Mrs. Fitzgerald yanked me out and we all made a beeline to the car.
Buried her husband under the Oldsmobile, huh? And was going to sell both the teacup and the wheelbarrow? A nasty piece of work, that Mrs. Patterson!
Because I know this story is intended for adults, I assume these events are in the distant past of an adult narrator. But the opening of the story gives me no clue about the time frame. I don’t know who the narrator is, how old she is now, or how long ago this event happened.
I think we need a brief orientation. It could be really brief, as in:
All my problems started twenty years ago at a yard sale with a teacup. (Now we have a reference to the time frame – twenty years ago.)
Or – since I gather from the reference to a dysfunctional household that she already had problems:
I can’t say all my problems started twenty years ago with a teacup, because I was already a damaged seven year old from a dysfunctional household by then, but a whole lot of new problems began the day my best friend Franny and her mother took me to Mrs. Patterson’s yard sale. (Now we’ve got the time frame, plus a little more about her.)
Alternatively, you could show the narrator in the present either using her (I assume) troublesome gift or avoiding using it, and then bring this scene in a little later. But since I don’t know what else is planned for the first chapter, I can’t say whether this is a good option or not.
Finally, I’d like to address the scene itself. If this is not so much a true flashback as a reflectionon the day her life changed forever, it could benefit from a more adult voice in the narration. Instead of making us feel like it’s happening right now, give us a sense of the adult narrator looking back on her damaged seven year old self – the one with no money in her pockets who liked to touch the merchandise. Was Mrs. Patterson’s furniture nicer than hers? Did she pretend she was Franny’s sister and part of the Fitzgerald family instead of her own? Did she hope strangers would think that’s who she was? Or did everyone in that neighborhood already know all about her? A little commentary from the adult version of the girl in this scene will help us connect to the character and demonstrate her distance from this event in time — as well as her distance emotionally.
Readers, what do you think? Do you favor a short orientation to place this scene in time, or would you rather meet the present-day character and get this scene later?

Robin, thank you for sharing your page with us! Everyone should check out Marcy’s critique of the same page at Mainewords, and be sure and say hello to Robin at her blog, Your Daily Dose.