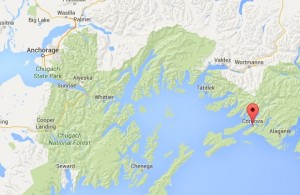 Hi, everyone! I’m easing my way back into blogging after a 6-week hiatus with a First Impressions post. This is the first page of a YA post-disaster adventure novel titled OVERLAND by Kristen Zayon.

It was a seemingly innocent thing, that first flicker. We were sitting in the Anchorage airport waiting for our flight home to Cordova when it happened. The lights trembled once, twice, then went out completely. If it hadn’t been daytime, the blackness would have been absolute. There were none of those emergency back-up lights shining in the corners, no glow from someone’s iphone. Anything electrical or computerized was just finished. We heard what sounded like a few distant explosions, then an eerie silence. We looked at each other and around at the other passengers. Everyone was stabbing fingers uselessly at their phones, laptops, the kiosk computer terminals. A murmur of voices rose, as everyone began to speculate.

Some of the airport personnel arrived with good old-fashioned battery powered or crank operated flashlights. The intercoms weren’t working either, or the little cars they sometimes drive around, so they were busy hoofing it from gate to gate, letting everyone know as much as they did, which was not much. There appeared to be a blackout that was at the very least spread across the Anchorage Bowl and Matanuska-Susitna Valley, and was most likely statewide. Perhaps it went even further. Nobody knew because communications were gone along with everything else; even old school land lines.

We hung out in the airport for a few more hours, until the time of our flight had come and gone. Eventually, someone announced that all flights were cancelled for the day, or until the power came back on. We left the airport to go back to the hotel we had just checked out of that morning. We had to walk, because anything with a motor was simply not running. Something major had happened, we knew. Power outages don’t affect cars. Solar flare? Nuclear bomb? We noticed smoke rising in several spots over the inlet, and remembered the explosions we had heard immediately after the outage. The planes. They had all crashed. I started feeling sick to my stomach.

We were in Anchorage for the state cross country running meet. For the first time ever, both the boys and girls teams had qualified, so we’d taken the ferry to Whittier and made the short drive to Anchorage. There were seven guys, six girls, and two coaches for the three day trip. By the time we were supposed to return, a storm had moved in to Prince William Sound, cancelling the ferries, so we had to book flights back to Cordova. This was always a hazard in Alaska when traveling in remote areas. Then we couldn’t all get on one flight at such short notice – it’s a small plane – so eight kids and Coach Ron were on the first flight, while the rest of us waited for the next one with Coach Casey.

I’ve read my share of post-apocalyptic YA books, but never one set in Alaska. This is a setting that will provide unique challenges in a world suddenly bereft of electricity and transportation. I looked up Cordova and Anchorage on a map (see above), and it looks like a long way to get between them over land (which I’m betting is the meaning behind the title) rather than by boat or plane.

The opening scene with the flicker of lights and then the failure of everything at the airport will work for this story – but we want to experience it in real time with the narrator, rather than as the summarization we have now. That first paragraph alone could take a page or so to convey if we get all the sensory details as they happen – what did it feel like, what did they hear, see, smell? Most of all, we want to experience the uneasiness that gradually turns to alarm and fear and panic after they realized the planes crashed.

A literary agent once told me that he looks for two things in the opening pages of a manuscript: character and a sense of conflict. The conflict is evident here, but kept at a distance from us because we don’t really know the character experiencing it. By the end of the first page, I know the narrator is a member of a cross-country team from Cordova, but not if it’s a boy or a girl or their name.

I think this story needs to start with us getting to know the main character in the Anchorage airport. He/she and teammates are coming from a state meet. Did the team do well? Are they feeling victorious? Their travel home has been delayed, and they’ve been split up. Has the delay brought them down from their post-meet high, or are they still in boisterous spirits? Are other travelers annoyed by their antics? Has Coach Casey asked them to settle down, or is she too busy on her phone to pay attention?

Then comes that flicker, and everything changes.

Kristen, thank you for sharing your first page! Readers, do you have anything to add? You can find Krystalyn and Marcy’s thoughts on their websites. And you can find Kristen as AKLibraryChick on Twitter.