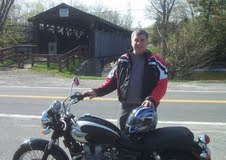 Our first submission for First Impression in March comes from Salvatore Cuciti. PATRIOTS is an Adult Mystery.
Chapter 1
Though I walk through the valley of the shadow of death, I fear no evil – Psalm 23
The moon over the orchard followed me, lighting my way across the fields, and the last traces of purple sunset stained the sky over the mountains. It was the last full moon before Halloween. A blood moon, or a harvest moon, I wasn’t sure. The moon seemed to fly through the gnarled branches of the apple trees as I gunned the old Triumph down the road.  I was flying too, following invisible lines of perfection in the curves and hills. The growl of the exhaust pipes stretched out behind me, and wind noise surrounded me.  I shifted down a gear, gave her some throttle and leaned into the turn. The motorcycle tracked a perfect line, with no correction needed, and screamed out the exit as if to rip the asphalt, lifting the front wheel, singing a like tenor in third gear, trying to tear itself out from under me.  I tightened my grip. In the dim light the landscape rushed past us in a blur.  My thoughts, my rambling chattering conscious brain hushed and paid homage to this moment; a second from destruction and content to be so. There was just the road and the howling motorcycle, the peace and the danger, the red moon and me.
That moon had gotten to me, it had come in through my windows with promises to light my way.  An hour ago I had been standing in my living room staring up at it.   I found myself a few minutes later lacing up my boots in the garage and looking for my helmet.  The old familiar fear came again, tickling my nervous system and the pit of my stomach with butterflies. I took a deep breath and shook my head and studied the motorcyle.  The faces of friends who have died or been hurt came back to me as I buckled the helmet, tickled the carb and kicked the starter. It’s a feeling of dread which experienced motorcyclists know too well.  But it quickly went away of course.  And so did I, out to race the red moon, to find a friend, for pint of ale and some talk.  I wanted to talk politics, dharma, some Buddhist teachings, football, anything to let out this restlessness inside me.  And drink beer and eat wings.  A spiritual journey does not mean necessarily bread and water. Not for me, Adam Paradise.
There is some beautiful imagery in these passages, and I’d like to say that although I’ve never ridden a motorcycle, Sal has made me FEEL this ride. I am there with Adam. I’m firmly in his head, feeling what he’s feeling, thinking what he’s thinking, and seeing what he’s seeing.
That said, there were a lot of little typos that I actually cleaned up before posting this page – extra commas, transposed letters, small missing words like “a.” I left “singing a like tenor in third gear” although I think it’s supposed to be “singing like a tenor in third gear,” but I wasn’t absolutely sure.  You’ll want to carefully comb through the text for those small, hard to see errors before sending it on to any beta readers, agents, or editors.
I also suggest taking those two large opening paragraphs and breaking them into smaller ones. There are beautiful sentences in there that will get lost in a large block of text.
There are two uses of the word “last” in the first two sentences, so I’d try to rephrase to eliminate one of them. I’d go for “the moon flew” instead of “seemed to fly,” and I would delete “it had come in through my windows with promises to light my way.” The next sentence follows nicely without it.
While reading, I wondered if every motorcyclist knows people who have been killed and injured on their bikes, and if seeing those faces before a ride is typical of every biker’s experience – or just Adam’s. I’m content to wonder that, however, since I feel confident I’ll get to know Adam better as I read.
So, in summary, I’d say Sal nailed the voice of this character and the mood of the piece (especially since I know it’s going to be a murder mystery). He just needs to work on cleaning up small editing details, and breaking up the text on the page. Space is important for the eye and mind of the reader, and it allows the writer to emphasize key sentences by beginning or ending with them.
Thanks for sharing your page, Sal! You can read Marcy’s critique at Mainewords, and don’t forget to come back next week for two more. Marcy and I will be taking a First Impressions hiatus in April so Marcy can participate in the A to Z Challenge. But we have openings for First Impressions in May, so feel free to submit!