First Impressions: TEMPLE BEYOND THE SEA 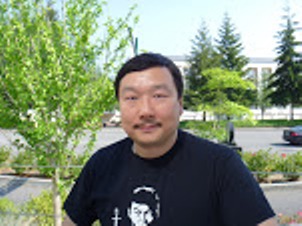 Happy July, everyone! We have a First Impressions post from Mark Murata today.  This is the first page of his New Adult historical fantasy, TEMPLE BEYOND THE SEA.

To be a priestess, the walk had to be flawless—the smooth heel-to-toe motion beneath the woolen robe that would soon be spattered with blood. Iphi had practiced this walk for two years, knew it was perfect, knew the ceremonial dagger at her waist was not bouncing from the motion. Sheathed at my navel, the center of life. Her slippered feet continued their smooth whisper on the stone floor of the temple, taking her through the darkness to the sunlight that shone through the linteled doorway, where the victims waited outside.

At the doorway itself she paused, heavy stonework on either side, the scents of life and fresh air greeting her. She had no need to blink—though the veil that hung in front of her eyes was thin and gauze-like, its deep-set purple shielded those same eyes from the sudden change in lighting. Iphi made the pause purposeful, foreboding. The whiteness of her face would sharply contrast against the darkness of her eyes, dimly glimpsed through the veil. Arms outstretched, she stood ready to receive the sacrifices lying on the altar. Any supplicant standing directly in front of her would have seen her framed by darkness. And further on, in the interior of the temple, hints of the image of Artemis herself showed—a pale statue in the same posture, lit by hungry flames.

The pause also gave Iphi time to contemplate this, the last phase of her training. She would ascend to the priesthood by performing human sacrifice. The dagger rested easily against her waist.

Her lips parted. There was no need for a last glance at any polished bronze mirror. The red on her lips was perfect, the same as the whiteness of her face. She stiffened her belly for the pronouncement, her voice deep and confident.

The goddess will have her sacrifice

Virgin am I, who serve her

All you who stand here, adore

Silence greeted the words. If any worshipers had been present, they would be murmuring in awe and fear. As it was, only two guards from the palace stood in the place for worshipers—no one else occupied the temple grounds, bordered by sharp cliffs that dropped off on either side to the sea below. Beyond a heath a few young women watched in rapt fascination, hoping the distance would keep them from being rousted out by the spear butts of the guards.

This opening page is a wowser – almost a perfect storm of vivid description, introduction to character and setting, and the beginnings of conflict. We have a novice priestess, well-rehearsed and poised, deliberate in every motion, which she has choreographed for maximum symbolic impact on her observers. And she’s about to perform (apparently several) human sacrifices! Who wouldn’t turn the page to keep reading?

There are some questions raised for me – (This might be deliberate, and they might be answered on the next few pages) – and a couple awkward sentences that could be improved if they were written more directly and simply.

First, my question: If every movement has been practiced and planned for the express purpose of impressing observers, why are there so few observers? Where are the worshippers? Even this sentence — Any supplicant standing directly in front of her would have seen her framed by darkness – is carefully worded so we aren’t sure if supplicants are actually present. The contrast between Iphi’s self-conscious and practiced exit from the temple and the lack of people there to see it may be intentional. I’d just have to keep reading to learn more.

Overall, however, I am impressed and intrigued. Readers, do you have any thoughts?

Mark, thanks for sharing your page. Mark can be found at his blog, Suburban Fantasy, and please don’t forget to check out the feedback on this page from Krystalyn and Marcy!