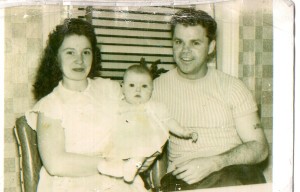 Our second submission for First Impressions comes from Mary Livingston. This is the first page of an adult short story with the working title of THE OLD DAYS.

Some people claim they have a vivid recollection of themselves in their mother’s womb and claim they can tell you, in detail, the usually elusive experience of birth.  They see themselves a little ball of flesh, floating in darkness.  The volcano erupts, the walls heave violently and close tightly around them.  One solid shove and they are forced into the world of things to come.  I must confess that I have no such recollection, but I can remember my parents before they were my parents.

He used to steer her down the streets of the past when she was just a baby.  And who would have thought that he would be steering her baby one day.  Certainly not him, for he was busy.  Busy maintaining his freedom to be wild, strutting like a male peacock, knowing the attraction of his brilliant color.  Busy trying to spread two dollars on as many girls, as many drinks and as many laughs as he could.  Seven years his junior, she was busy then writing in her diary, while he had already read that chapter in the book.  Today, he says, “I was waiting for your mother to grow up.”  And everyone smiles and slyly glances at everyone else, knowing that those laughing blue eyes in that devilish Irish face were looking anywhere but into a baby carriage.

I remember about a year before the “big war” was over.  His number came up.  His family said, “Thank God that no good son of a …is leaving.”  They cackled and chuckled to cover the dull ache in their guts.  For people feel sad when a while animal is on the verge of becoming domesticated.  The battle in the streets was common to them.  But this new battle was foreign to them.  And although they had slackened the line attaching him to them years ago, they now held tightly onto their end.  They gave him a party, as people will do, on the night before he was to go.  But, true to his leprechaun nature, he didn’t go anywhere, except to sleep with a smile on his face.  And if they all hadn’t been so hung-over, they would have killed him.  When he was out of sight, they would commiserate in humor about the boldness of his nature.  In his presence, they would mumble their disapproval, look everywhere but at him, and stifle an urge to grin.  Today, he winks while opening a beer and says, “I had a lot of parties when I went into the army”.  She moves her eyes without moving her head to look at him, and when he looks away, she smiles and he knows she is smiling.

In those days, she was totally and wholeheartedly obsessed with the smile of the boy in the grocery store.  And the boy on the corner.  And the boy…Mind and eyes mesmerized by the silver screen, she would lick the last bit of her sundae as she and Astaire finished their dance.  He was her older brother’s friend and another piece of furniture in the mishmash that was her home.  And though they were so close, she could lean slightly to the right and touch him; in those days, she was looking past him into her own reality.

There is a lot to like here. I really enjoyed the beginning of this passage, especially how the narrator “remembers” her parents before they were her parents – obviously from the stories they (and other family members) have told. I really like the idea of her father pushing her mother in the stroller, never imagining that one day he’d do the same for a child belonging to the two of them. And the overall voice of the piece appeals to me.

I do see a number of things that could be changed for clarity. One is quite simple. Whenever switching from the past to the present (Today he says …), put the present day quote or memory into a separate paragraph to help the reader see that transition. Also, referring to everyone by pronouns (he, she, they) is a stylistic choice that can work, but the author has to make very sure the reader knows who is being referred to. In this passage he refers to the narrator’s father; she refers to the narrator’s mother, but they is often unclear. His parents? People in the neighborhood? This could be clarified.

I have a question about the age of the narrator’s mother. If they are seven years apart, then that makes him around seven or eight when she is a baby in a stroller. Is he really strutting around like a peacock at that age? If he is pushing around a slightly older child – perhaps she is five years old – then let’s not call her a baby. She is also mentioned as keeping a diary in that paragraph. This is doubtful for a baby or a five-year-old, so perhaps the diary reference needs to be moved to a different location.

After this, there seems to be a jump forward in time to when he is called up for war and she is obsessed with boys in the neighborhood and on the movie screen. A better transition is needed to define this time jump for us. How many years later?

And I was a little confused about what happened when he was called up for war. Was his family really happy to see “that no good son of a …” go to war? Or does they refer to the people in the neighborhood? Why did he end up going nowhere? Was his enlistment deferred? Did the war end? Or did he dodge the draft? This was unclear to me.

Overall, I think this is an engaging early draft with a strong voice. A little organization in terms of paragraph breaks and time shifts will go a long way, as will clarifying pronoun references and the section about the draft. THE OLD DAYS is given as a working title. I do think something more unique might present itself when the story is completed, revised, and polished.  Readers, what do you think?

Mary, thank you for sharing your page with us, and good luck with your short story! Don’t forget to check out feedback from Krystalyn and Marcy at their blogs.