First Impressions: UNTITLED YA (but it’s got a Mothman!) 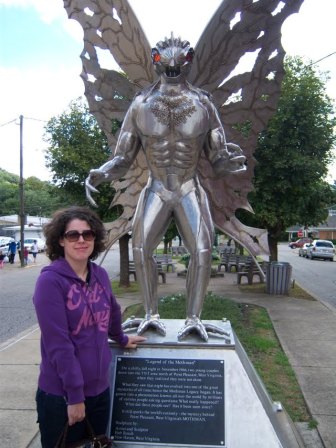 The final First Impressions post for the month of January comes with this lovely picture. Yikes! I swear I screeched when I opened the file!
This untitled YA is Heather Day Gilbert’s NaNo project.  It’s not finished, but she says she might follow up on it if it seems interesting to people.
CHAPTER 1: INEXORABLE:
Unable to be persuaded by request or entreaty; relentless
I’ve often wondered, where’s the heart of my town?  It’s not in the mural wall, alive with scenes of the Native Americans who first settled here.  It’s not in the charming outdoor amphitheater, snuggled up to the river, so you can riverboat-gaze at your leisure.  It’s not even the haunting memorial plaque and inscribed bricks for the victims of the Silver Bridge Collapse of 1967.  No, the heart of Point Pleasant is smack-dab in the middle of town, and it happens to be a chrome statue of a crouching alien, eyes glowing red and claws outstretched to grab stray children.
Don’t ask why I grew up with a few issues.
I’ve tried to persuade my parents to move away from Point Pleasant.  But both my parents grew up here, in Almost-heaven West Virginia.  Who’d want to leave this slice of paradise on earth, they ask?
Well, anyone who’s mortally afraid of the Mothman.
Yes, I said it.  The Mothman.
I’m not talking about the kitschy Mothman glaring from Chinese made t-shirts in the Alien Shoppe downtown.  I’m not even talking about the afore-mentioned statue, imbued with the power to make kids burst into tears on sight.
I’m talking about something my preacher can’t explain, something that I saw outside when I was a little girl, playing on my teeter-totter with my brother.
There I was, having a rip-snorting time, driving Atom crazy by planting myself firmly on the ground so he dangled in the air.  He was kind of shrimpy at the time, so he was kicking around and yelling things like “You booger!  I hate your octopus guts!”
I thought about letting him down gently.  I really did.  But at that moment, I noticed this grey thing, hunkered down behind our white fence.  Naturally, I had to find out what on earth it was.  I’d wanted a German Shepherd for ages, and there was an off-chance a stray had finally made its way to my house.  I threw one leg over the board and jumped off.
The minute Atom started to scream that his nose was broken, the grey thing rose up.  I still thank the good Lord that Atom’s eyes were so squinched up with crying, he couldn’t see the ten-foot tall bat-creature standing right in front of us.  Well, maybe it wasn’t ten feet, and maybe it wasn’t a bat.  But it sure wasn’t a German Shepherd.
Interested? Um … YEAH! I don’t even have a lot to critique, just a few small points that could use tweaking.
The first line is one of them.  It needs to be re-stated, because the rest of the paragraph makes it clear the narrator does not wonder where the heart of town is – she already knows.  I think this makes for an interesting first paragraph, so I wouldn’t eliminate it, just re-word that first sentence.
I’d also suggest dropping the line about “something my preacher can’t explain.”  I’ve only posted the first 400 words, but Heather actually sent me more. So, I know that on the very next page, the narrator’s parents quickly explain and dismiss what she saw. So why can’t the preacher?  Unless there’s also going to be a scene in this chapter where the narrator consults her preacher (and what he says is important), she might not want to bring him up on the first page.
And (a very small point) I’d drop the “Chinese made” in front of “t-shirts” just to simplify that sentence. If it stays, it ought to be hyphenated, but I think the sentence reads better without the modifier.
Other than that, I’ve got nothing to suggest to Heather, except to keep writing!  After reading this selection, I ran to Google and ended up looking up the Mothman, the Silver Bridge Collapse, and adding The Mothman Prophecies to my Netflix queue. I’d love to know where Heather plans to take this story!
Thanks, Heather, for sharing the first page of your work with us!  You can visit Heather at her blog, Book in a Month Mom, and don’t forget to read Marcy Hatch’s critique of this page at Mainewords!