Many thanks to my brother-in-law, Larry O’Donnell, for taking over my blog this week while I tackle book promotions, Christmas, and other writing/motherly duties. Larry, a retired federal agent, has worked for several of our law enforcement agencies in his career, including Customs. (Larry is my consult for all things military — including the airborne assault of a certain pyramid in The Eighth Day.) This week, he’ll be sharing one of his many experiences protecting the eastern coast of the U.S. in the 80’s — which apparently involves some “adventures in yachting.”

On New Year’s Eve 1987, at about 1600 hours, three Customs interceptor vessels departed Cat Cay, Bahamas, pursuant to information that there would be several airdrops of cocaine in Bahamian waters.  The boats split up, and I took my interceptor, M-676, north from Cat Cay to Bimini threading my way between rocks, wrecks, and random sandbars.  There was a heavy chop on the Grand Bahama Bank, where the depths ran between 8 and 12 feet deep. The bank’s western boundary was marked by a string of coral, rocks, and islands, among which was Bimini. 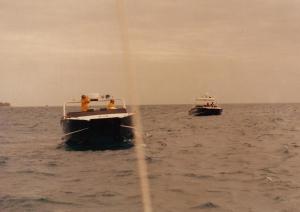 Photo taken at the beginning of this operation — a few hours before “all heck broke loose.”

As darkness fell, I moved to a position just west of Bimini. My crew of two and I anchored in the lee of the island, sheltered from the high winds and heavy seas.  Sometime after 2100 hours, we saw a few small red flares go into the air.  Moments later, we heard an aircraft, which turned on its navigation lights and started circling to the west of us.  Then, a vessel that was less than a mile west of us started using a spotlight to locate and pick up items floating in the water.  I started the engines, and we pulled in the anchor.

The smugglers took off at full throttle shortly after I started the engines. Two 500 HP Chevy 454’s with open pipes didn’t leave us much opportunity for stealth!  The smugglers, less than a mile away, downwind, had to have heard them.  My hook was up, and the chase was on: Two boats running, blacked out, east toward Miami.  Through night vision goggles I could see the smuggling vessel, an ocean racer with a center console, 4 or 5 outboard engines, about 37 feet long.  The boat was throwing cascades of foaming water to either side as it banged through the waves.

A few miles west of Bimini, the seas were running 3-5 feet and the winds were blowing 20 knots steady with gusts over 30.  We were closing on the target.   It was an extremely violent ride in the beginning and as we raced west, away from the islands, the seas increased to 5 to 7 feet and the waves opened up.  The ride got worse, and I was busy working the throttle and wheel, using the night vision to judge wave jumps.

Those of you who have not done something this crazy should not try it.  But if you must experience how this ride felt, find a 10 story building and get into a stairwell on the 10th floor.  Jump down four or five steps at a time as fast as you can, and at each landing, land on your face or knees.  Every two floors, try to land on your elbows and knees at the same time.  Repeat until you have had enough fun.

With each mile, I was gaining on them, but the seas were building.  We radioed the Blue Lightning Operations and Command Center (BLOCC) and advised them of our situation.  BLOCC called a general lookout and locked down all inlets from Key Largo to Lake Worth inlet.

The target was about a quarter mile away, and I was thinking about how to board her in such rough water.  I throttled back to 30 knots due to the sea state, about 7 to 9 feet.  A few minutes later, I saw the smugglers punch a wave. (One punches a wave when one spears through the wave rather than going over it.)  The smugglers’ boat really took a hit.  A huge amount of water poured into the vessel and the console was torn from the deck.  The boat struggled out of the wave still making some forward motion and dipped into another wave, with less damage but coming nearly to a halt.  With no helm or throttle controls, I knew the chase was over.

I yelled out to my crew that the target was stopped and badly damaged.  I told them to be ready to board the vessel or bring the smugglers on board.  I was working out the best way to approach as I turned in the corkscrewing sea.  I looked to my right to check their status.

Then, I punched a wave.

To be continued on Wednesday …