This is a continuation of Bahamian Yachting, a guest post by my brother-in-law, Larry O’Donnell, a retired federal agent and former Customs officer. He is recounting his adventures on New Year’s Eve, 1987.  For part 1, check out Monday’s post!

Some friends might say I go to extremes sometimes, but I was not trying to outdo the smugglers.  Usually the vessel commander gets to duck the wave because he sees it coming.  Since I was looking at the bad guys, I saw the wave too late.  For those of you who found a 10 story building to try out those jumps and are still looking to get the feel of this yachting experience, go to a hotel with a pool close to the balconies.  Go to the fourth floor (UK friends go to the third) and belly flop into the pool.

Fortunately, my M-676 was designed to meet this situation better than boats with the center console design.  Two thirds of the vessel is decked over.  I only felt like I had been hit in the chest with a pipe while a gorilla tried to rip off my head.  I throttled back, shook off the hit, and took a quick look around my boat.  My Customs crewman, Mike, was on the cockpit deck coughing up sea water. (Never preface your profanity with the word “OHHH” while punching a wave.)

My other crewman, a Bahamian Defence Force NCO was missing.  I heard a shout and realized  he was hanging onto the stern rail, on the wrong side.  Fortunately, I had the boat in neutral, so he got to keep his feet and lower legs. I ran back and, with Mike, pulled him back into the boat.  He told me he would pray for my soul every day for the rest of his life.  Much of this account has been couched in humorous terms but it gets serious here.  I know my soul has been prayed for every day since then.

I got the boat going again.  Somehow, my night vision goggles were still on my head and working.  I motored up a wave and when I got on top, I had no problem finding the smugglers’ boat.  I saw glaring lights several hundred yards away washing out the NVG’s. I grabbed binoculars and took a look.  It took a few seconds to get them in the field of view.  The target appeared to be riding up on a wave, very low in the water.  There was no prop plume or other clue that the boat was still running.  The console was wrecked and the boat appeared to be drifting.  Two men were using flashlights and another appeared to be pulling something off the deck by the console.  My impression was that it was a life jacket that was stuck.  None of them were wearing flotation.

My concentration on the target almost cost us another dunking.  As I tried to maneuver around to head after the disabled smuggler, we nearly broached when we rocked hard on a wave broadside.  As the boat picked up speed, we pulled up on top of a wave and I got another glimpse of the target. 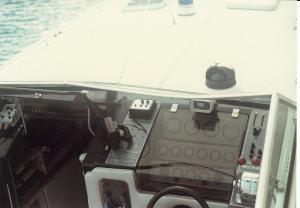 The vessel was now broken in half, and the stern was gone.  The bow section was inverted and two guys were in the water next to the hull, waving flashlights around.  The chase had just turned into a rescue mission.  I tried to move the boat in their direction and got way out on a wave, like a surfboard.  The bow dropped sharply and we punched into the base of a six foot wave.  We all fell down forward and the boat abruptly stopped as if we had rammed something.  My forearm hit the Plexiglas instrument cover and the cover broke.  My arm didn’t break along with it, but it hurt badly.

I managed to throttle back as the props were spinning in the air.  The stern fell and I saw the engine hatches both swing open just as the stern splashed into the water.  I pulled the kill switches, shutting off the engines and it got very quiet.  Someone closed the hatches and I tried to restart the engines.  A couple of kicks and sputters and then nothing.

We bobbed around a bit riding up and down with the waves.  I got one last look back at the smugglers.  One flashlight was moving around rapidly, and then our boat went into a trough.  That was the last I saw of the target vessel or its crew.

Meanwhile, our boat was dead in the water.

To be concluded on Friday!