And now the conclusion of Larry’s New Year’s Eve yachting adventure … (You can find Part 1 HERE.)

Fortunately, the boat still had all batteries in working order, and we radioed for assistance.  One of the Blue Thunder interceptors – Warren Parks was the skipper – arrived around midnight and tossed us a line.  I climbed out to the bow and, hanging onto the railing with one arm and both legs, I attached a line to the hauling ring between the deck and the waterline, tying a bowline knot with one hand.  I got dunked a couple times while doing it.

An hour later, I determined that we were making negative progress and our rescuers were going to run out of fuel before we got anywhere.  So I cut the Blue Thunder loose, and Warren told me he would figure something out with the supervisor and get back as soon as possible.

The three of us sat in the cockpit trying to avoid the wind.  Nobody wanted to go below in the pitching boat since many things had broken loose and were flying about the cabin.  We had some brief discussion about the fate of the suspected smugglers.  None of us felt good about their presumed bad outcome.  (My wife doesn’t like my stories where somebody gets killed, and she asks that I refer to it as a bad outcome instead of the K or D words)  There was some speculation as to whether the smugglers met a bad outcome by drowning or got badly outcomed by sharks.  Ultimately my crew decided that we were very lucky.  I remember muttering something like the night wasn’t over yet.

The only nice diversion were some fireworks far off to the west at midnight.  Around 0400 on New Year’s Day, 1988, Supervisor Joe Goulet and Warren Parks arrived in the 63 foot Hatteras yacht from our command center in Cat Cay.  The boat was supposed to stay at the dock but Joe was the kind of boss who didn’t leave his men drifting in the ocean.

I did my one-handed-tie-the-bowline-knot-while-dunking-in-and-out-of-the-shark-infested-ocean trick again. This time we got on board the Hatteras and dried off in the warm cabin.  I took the helm to relieve Warren.  The boat had clearly been rolling hard getting to us.  The furnishings and one large radar repeater had broken loose.  The return was easier, as the seas had laid down considerably.  I thanked Joe for coming to our rescue. 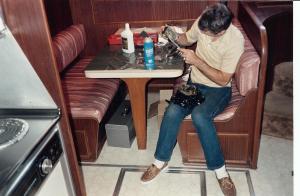 Rebuilding the carburetors after both were contaminated with salt water during the chase.

Warren mentioned something about coming back to see me do the towline trick again.

The larger vessel’s two big diesels had no problem pulling M-676 back to Cat Cay.  We pulled into the dock at 0700 and made the obligatory joke about how we hadn’t been there since last year.  The supervisor reminded us all that there was no overtime for the day, since our shift had ended at midnight and we had the holiday off.

I spent the next three days putting M-676 back together well enough to get us home, which she did.  I had some paperwork ahead of me.