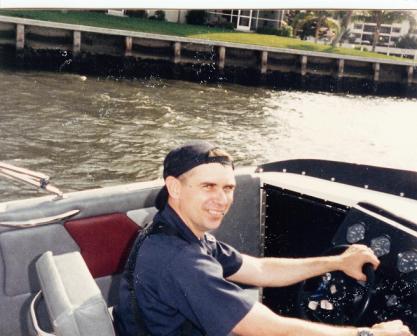 Last week’s post on cursing inspired a complimentary piece by my brother-in-law and sometime guest poster, Larry O’Donnell.  Retired from 32 years in law enforcement (including Customs and the Secret Service), Larry has joined the ranks of us writers and has this to say about swear words:
In my two WIPs all of my characters use words not for use on prime time network TV.  I write a lot of dialog and it just would go flat or be unfreakingbelieveable.  Let’s face it, expletives are part of the language and can really be useful to emphasize a point.  In real life they come fast and furious when emotion is high.
My late mother once informed me that my first recognizable word was “sh***”.  She pled guilty to having used the word around me when no one else was around, presuming I would not hear or repeat it.  It is a useful word and, like its companion f***, is one of the more versatile words known in English.   It is or has forms that are a noun, a verb, adjective, expletive, and adverb.  George Carlin did a routine on it.
I was always amused when Snidely Whiplash would say “Curses” or “Curses, foiled again.”  Those of you who remember Dudley, Nell, and Snidely never heard profanity on the TV back then.
During a particularly difficult boat chase one night, my crewman was knocked off his feet a couple of times and had the radar unit smack him in the head while trying to make a radio call to our task force Blue Lightning Operations Command Center (BLOCC).   His first sentence after they acknowledged the call sign was “F***, F***, we’re in pursuit, F***, F***, it’s bad, real F***ing bad.”
BLOCC’s response was classier- “676, say your position, course, and describe the subject vessel. We got the F***ing bad part.”
All I could say when I watched the suspects’ boat break in two and sink was “Sh**.”  As I watched through night vision goggles, I saw three guys go into the water without life jackets.  Our vessel had lost both engines to bullets, and we were about three hundred yards away, dead in the water.  When BLOCC asked for an update on the status, my crewman looked at me and said “Well?”  I said they were F***ed.  He passed that news on verbatim.
I recall saying “Sh**, that was close.” on many occasions and more than a few times, “Sh**, that was F***ing close.”.
Law enforcement is rife with profanity, probably more than needed.  What they don’t show on Law and Order is that lawyers curse more than cops.  Thirty-two years in military and law enforcement and I have to say lawyers are the most profane group of folks I’ve ever observed.
Since both my WIPs are law enforcement oriented tales, there is profanity.  If I was writing about a researcher in the Vatican, I would probably avoid cursing, except for a bit under the character’s breath.
All the above having been said, it will likely be an editor who will ultimately decide what sh** needs to come out and if the profanity is inf***ingappropriate or f***ing right on target.
That’s about all I f***ing have to say except that I have always thought it is likely that my last word is going to be “sh**” too.