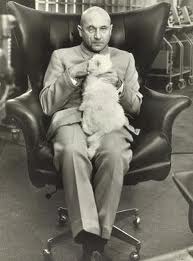 Today I have my brother-in-law Larry O’Donnell here with a guest post. (No, that’s not him on the right.) I’m pretty sure I know what activity he was doing when he conceived and composed this little essay …

Of Men and Cats — Larry O’Donnell

I find cats to be curious critters. They have been worshipped in some cultures and vilified in others. Blofeld came off as a creepy Bond villain with a fancy cat in his lap. There are lots of references to cats in the Bond flicks, but I won’t go there.

I am medically diagnosed with an allergy to cats, their dander, saliva, and general presence. So, when I volunteer to clean the cats’ litter boxes for my wife, it is a real token of my affection. The cats know about my allergy, some sort of sensor they have. They swarm me and rub up against me. I usually pay the price of a stuffy nose and itchy eyes and throat.

Many folks assert that cats are lazy and lie around doing nothing all day. This is totally wrong. They do something all day and it goes in the litter box, or on the floor if their aim fails. They only eat and drink so they can continue to fill the litter boxes.

We have four cats, three of advanced age and one with just a few years on him. There are three pans full of kitty litter. They are full of other stuff too, and that’s where I come in with my opposable thumbs.

The cats use the pans even as I’m cleaning them. Of course, since I’m there, the cat doesn’t cover up his work; he just leaves it for me to deal with it. There is nothing quite like fresh cat scat. I saw a fly land on one. He jumped off, went a few hops and then threw up. Even my stuffy nose fails to protect me from the smell. I gag along with the fly.

Finally I carry the bag of sh…er waste up to the dumpster and dispose of it. Good job, unless the bag breaks. Even County HAZMAT refuses to respond to this type of mess. They jump all over nerve gas or anhydrous ammonia but draw the line at cat waste.

Sometimes I have to give two of the cats their insulin shots. (My wife asks me to “shoot the cats.” I grin and she says, “Not that way.” My smile fades and I get the syringes.) One cat comes out and says, “Shoot me up, I’m jonesin’ here.” The other one, who weighs in at about 20 pounds, flees under some furniture. There, he puts up a defense like the Russians at Stalingrad. I usually get scratched or bitten. Occasionally, I get the insulin. No problem, I just drink a quart of orange juice and eat four Milky Way bars.

Cats are strange creatures. They seem to always have a facial expression that says, “What’s in it for me?” Call one and he runs away. Shoo one and he comes to you. I don’t understand cats but they do provide me with a means to demonstrate my affection for my wife.