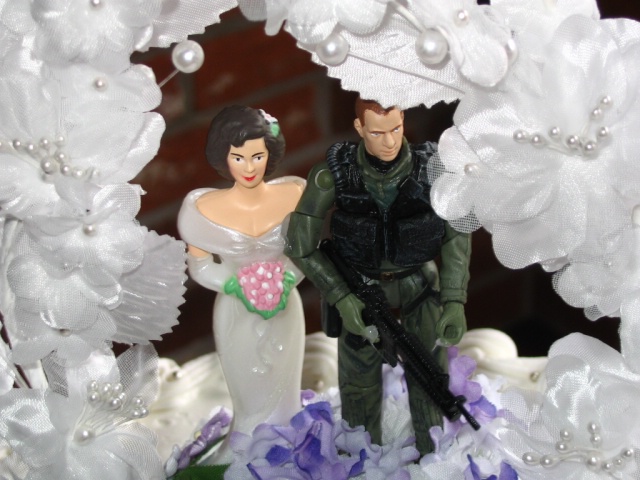 This is the final chapter in the strange courtship between my sister-in-law and the Federal Customs Agent stationed on stake-out duty in her house.

When we left off, agents were camped out 24/7 in my mother-in-law’s garage. She was in her glory, bringing them coffee and baking them cookies.  Next door, Larry was spending his days in my sister-in-law’s attic. Despite being shot down romantically, he did his best to avoid disturbing the routine of her household. I know for a fact he once chased Deb’s deaf cat — which he’d accidentally let escape into the attic — all around the rafters, futilely calling, “Here kitty, kitty, kitty.” 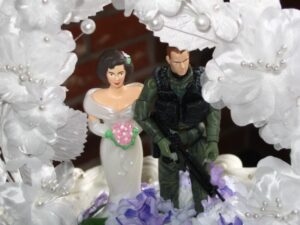 How I Met My Wife by Larry O’Donnell
Having been firmly rejected by Deb, I did what I always do when I get shot down.  I analyzed the defeat and prepared to re-engage from another angle.  When the marijuana was finally seized and arrests made, I approached Deb again.  I asked her to maintain some communication and to advise me if she was harassed by our defendants’ associates.
(Not a bad ploy, huh?)
Deb provided me a “disposable email address” and we started corresponding.  A month or so later, she finally agreed to meet me for dinner at a neutral location.  (*Waves hand* I encouraged her to say yes!) Recovering from my original crash and burn, I took flight again.  We enjoyed the meal and agreed to do it again.  For over a year and a half we had a commuter relationship, as we lived sixty miles apart.
Events in the Middle East continued to influence my professional and personal life.  A secure telephone call from Headquarters informed me about a US led coalition invasion of Iraq. Customs agents would go to war with US troops.  They asked me to lead a team to relieve agents on a 90 day rotation and I agreed.  I asked Deb to pay my bills for the three months I was away (I gave her my checkbook).  My parents agreed to look after my house, my kids, and my dog, Rodan.
Rodan was descended from dingoes.  Not too many generations, either.  He was living with my children’s mother until he started trying to eat her other dogs.  She sent him to me and he became part of my household.  A few days prior to deployment, my father gave the dog a look to which Rodan took exception, resulting in my father being bitten.  I had only three days to find an alternate placement for Rodan.  Deb agreed to take him in.  One day, I hope Deb will provide an account of her experiences with Rodan.  (Agreed. That was one scary dog.)
On a more serious note, I told Deb that, presuming I returned intact, it was my intention to ask her to marry me.
On August 28, 2003, I arrived in Iraq.  Deb sent me letters or packages nearly every day.  I did my best to communicate with her by email and satellite telephone.  There were a more than a couple of times my team and I avoided death or injury by what seemed to be Divine intervention.  It would take another two blogs to relate my experiences there.  One night, I fell moving to cover during a mortar attack and broke both elbows.  I had been asked to extend my duty until January 12, but the injury got me home a month earlier.
Deb took care of me until I could fend for myself.  I was intact enough to ask Deb to marry me.  She accepted the proposal and we wed twice the following summer.  Deb can explain that, too.
(A memorable moment from the reception: My husband and I asked the DJ if he could play the song “Secret Agent Man.” He said he didn’t have that in his repertoire.  But then he leaned down and whispered, “Why? Is the groom a secret agent?”  My husband and I looked at each other, and Bob said, “I’m afraid we can’t tell you.”  The DJ nodded nervously. “I get that,” he said. “It’s just that there are a lot of burly guys here in dark sunglasses, and I think some of them are armed.” He was right, of course. I think they were all armed. I’ll bet Larry was armed.)
That is the Readers’ Digest version our story.  There were many more events which occurred but a detailed account would be a book.  With two WIPs, I won’t be starting any more books until one or both of them are finished and rejected at least twice.  Then I’ll do what I always do…