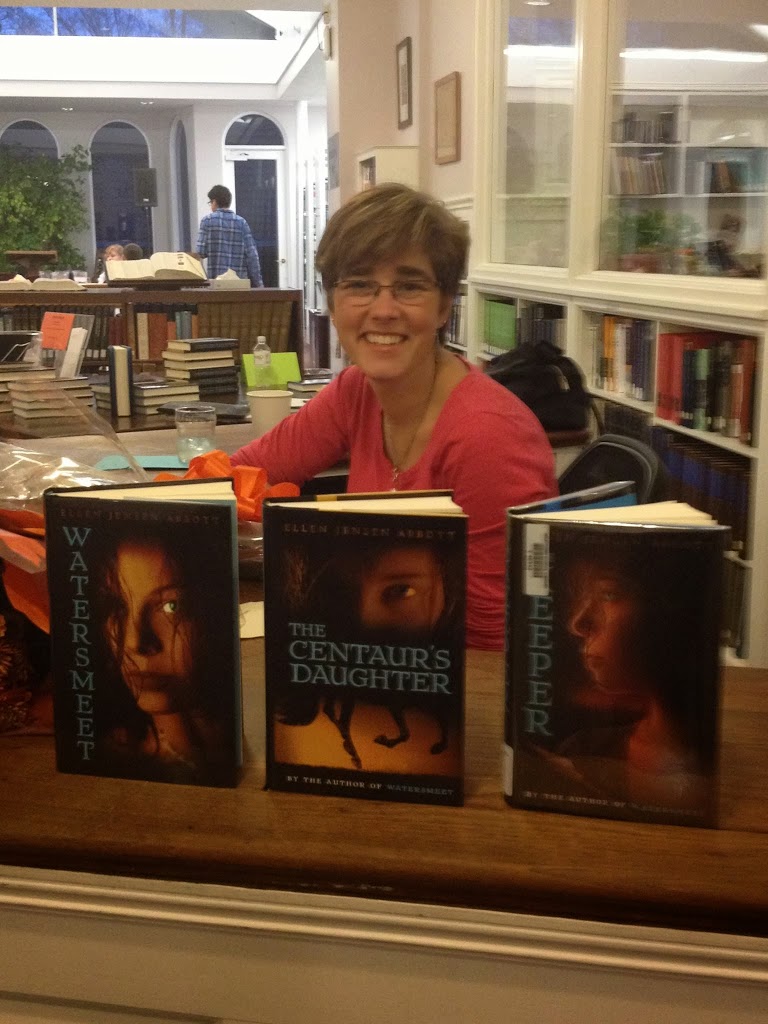 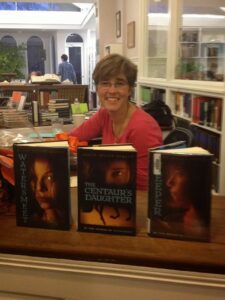 When local author and fellow KidLit Author’s Club member Ellen Jensen Abbott mentioned that the third book in her WATERSMEET trilogy was releasing this month, I asked if I could host her here at In High Spirits.

In particular, I wanted to pick her brain about the writing of Book 3. Because, as you might know, I’m working on one of those right now. When I read the post she sent to me, I felt relieved. Yes, yes, yes … this is what I’m experiencing!

Before I get to her post, let me tell you about the WATERSMEET trilogy:

In the Watersmeet Trilogy, readers follow the outcast Abisina as she leaves her village to search for her father and for acceptance. On her journey, she discovers the whole land of Seldara: the dwarves of the Obrun Mountains; the fauns of the western forests; the centaurs of Giant’s Cairn—some friends, some foes. When she reaches Watersmeet, she thinks she’s found the home of her dreams where all of Seldara’s folk are welcome, but soon Watersmeet’s existence is at risk and Abisina finds herself outcast again. Can she save the home she loves? Can she unite the land against a gathering evil? Can she embrace her destiny and become the Keeper of Watersmeet?


And now I turn the blog over to Ellen Jensen Abbott for Lost in Book Three:

In some ways, writing The Keeper, the final book in my Watersmeettrilogy, should have been easier than writing the first two. I knew vast majority of my characters. I knew my setting, right down to geography, climate, government and religion. I even knew the conflict: the series is about the creation of the nation of Seldara and the coming of age of Abisina, Seldara’s founder. But writing The Keeper was not easy; it was the hardest book I’ve ever written.
Writing a book is like finding a route through a maze of streets. You begin at point A and are headed to Z, but how you get there is the work of the writing. Each time you make a choice for Pine Street instead of Elm Street you have cut off possibilities, even as you’ve opened others.  Sometimes you get within sight of Z and you realize that really, the best way to get there is via Elm, and you have to back up and try again. But maybe by choosing Elm, another route you loved is no longer an option. More backing up. There are going to be wrong turns and backtracking, but eventually you’ll get there.

The process changes, however, when you’ve written a book or two that are out in the world. You are locked into the decisions you made in those books. If your route in Book 1 went through Pine, you will always have to go through Pine and can never go through Elm. Once I placed a mountain range across the land of Seldara in Watersmeet, there was no taking it out for The Keeper. More problematic than geographic features, however, were characters. Our job as writers is to create characters who are so real, they have full psychologies. Like Frankenstein’s monster, they quickly become independent beings who insist on acting in specific ways. Once my main character, Abisina, fell in love with Findlay, she would not look at anyone else. As I wrote The Keeper, I knew that their love had to be challenged, but a love triangle was not an option, hard as I tried to make it one. Abisina was too smart to risk her relationship with Findlay unless she had no other choice, and writing new flaws into Findlay’s character was not an option. He existed already, and he was the one Abisina loved.

There were more than a few times when I thought that I would never, ever get to the end because I had simply made a wrong turn in Books 2 and 3 and now the route was impossible. But it also felt impossible to change the ending. I had been heading toward it for 5+ years! It had dictated all sorts of decisions; what became of my earlier books if Z was no longer my goal?
I never found an easy solution to writing that third book. I had written outlines and summaries of the series early in the process and these helped a little. Outlines and summaries are general by nature, however, and it was usually in the details where things got difficult. Sometimes rereading my former books helped. There were seeds planted in them that I forgot about, or characteristics of geography or character I could exploit to get closer to my goals.  But the most foolproof means of getting to the end was to simply keep writing. And writing and writing and writing. I had to cling to my belief that there are no wasted pages—that even when I have to delete scenes or sentences, I have learned something valuable in those pages.

Finally, what kept me going was the knowledge that I had done it before. Faith in my story, faith in my characters, and faith in my process kept me writing—sometimes with gritted teeth. And now, I have a complete series—a series that ends at Z as planned. I also have files upon files of rejected pages—maps of journeys I have taken to L, W and X—beautiful destinations in their own right. And now that I’m thinking of a companion book to the Watersmeet trilogy, destinations I may still get to explore.

I have to tell you, my blogging friends, it made me feel a whole lot better to know that Ellen’s journey was similar to my own! Like her, the one thing that keeps me going is the knowledge that I did this twice before. Like Ellen, I have to believe I can do it again!  Thank you, Ellen!

Ellen Jensen Abbott lives in West Chester, PA and teaches at the Westtown School. Her debut novel, Watersmeet was an IRA Young Adult Award Notable Book, and was nominated for YALSA’s Teen Top Ten. The adventure continues through The Centaur’s Daughter (Skyscape, 2011) and The Keeper (Skyscape, 2013).
You can meet Ellen at her blog.
And you can find the first book in her trilogy, Watersmeet, on Amazon and at Barnes & Noble!