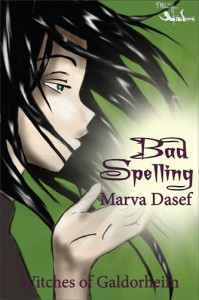 Last Friday the 14th — just one day removed from Friday the 13th — my friend Marva Dasef’s new book Bad Spelling released from Muse It Up Publishing. Bad Spelling (Book 1 of The Witches of Galdorheim) is a middle grade fantasy involving a klutzy witch and a shaman’s curse.

If you’re a witch living on a remote Arctic island, and the entire island runs on magic, lacking magical skills is not just an inconvenience, it can be a matter of life and death–or, at least, a darn good reason to run away from home.
Katrina’s spells don’t just fizzle; they backfire with spectacular results, oftentimes involving green goo. A failure as a witch, Kat decides to run away and find her dead father’s non-magical family. But before she can, she stumbles onto why her magic is out of whack: a curse from a Siberian shaman.
I’ve got Marva here today, sharing a guest post on the art of scrying, as used in her novel.
SCRYING by Marva Dasef
Crystals, water, fire, clouds, steam, chicken bones. All of these objects have been used to see into the past or future. Well, that’s the story anyway. You recall the Penseira from the Harry Potter series. That, too, is a scrying object, but recalls memories of the person using it.
In Bad Spelling, the witches use a scrying crystal. They can see the past only, but the past can be just a seven-second delay behind.
Kat wants to find out about the family of her fatber, Boris, a marooned Siberian fisherman who happened to get stuck on Galdorheim Island. Kat’s mother liked his looks, rescued him, and they hand-fasted. Kat was the result of the union. Shortly after her birth, however, Boris was trapped in an ice cave collapse. His body remains encased within the glacier.
Kat asks her mother to trace Boris’s path back to his origins. Ardyth had never done this before because it was against witch code to scry a person without their permission. When Kat points out that Boris could hardly object, Ardyth agrees to scry Boris’s past.
The crystals I describe aren’t the standard Gypsy crystal ball, but natural morganite crystals. Out of the rough crystal structure, the witches shape a scrying crystal from the pure morganite.
AN EXCERPT:
Ardyth rummaged through a box on the floor and extracted a large chunk of Morganite beryl. “Ah, here it is. I haven’t used this in years.” She placed the pink, six-sided crystal on the table. She opened a crate standing near the worktable and rummaged through it. “Did you know the Druids used beryls for scrying? Morgan Le Fay learned how to use them from Merlin. He was a Druid, you know.” She pulled a white cloth from the crate and laid it flat on the bench, setting the beryl precisely in the center.
Ardyth lit two candles and placed one at each end of the table. “You don’t want the candles so close the flame reflects off the crystal.” She explained each step to her daughter, who hadn’t participated in a scrying before. Ardyth held her hands, palms facing inward, on each side of the crystal, close yet not touching. “There. Now, I can take a peek and see what reveals itself. Sometimes it’s stubborn and doesn’t want to cooperate.” Ardyth leaned closer and peered into the beryl. “The idea is to look into the center of the crystal, not the surface.”
Bad Spelling is available directly from Muse It Up and on Amazon Kindle. You can find out more about this book at Marva’s website, and on Wednesday, my daughter Gina will be here with a guest review.