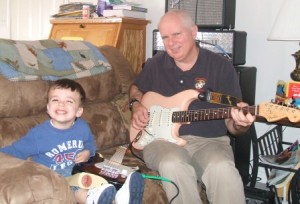 Today, I have a guest post from my brother-in-law, Larry O’Donnell about his newest paying gig. Do you all remember the scene in The Blues Brothers where they play Rawhide repeatedly in the dive country-western bar? Apparently, Larry’s played in places like that, but they pale in comparison to the tough crowd he plays these days!

Playing a Tough Room by Larry O’Donnell
A couple weeks ago, I started my first paid gig playing guitar since 2003. Prior to that year, I played (paid) gigs with different bands going back to my teens. I never played big venues or with any famous band. I was mostly a VFW, Elks, Moose, and small bars kind of player. I played at picnics, church functions, charity events, and office Christmas parties. (Now known as Holiday parties)
Places with names like Salty’s, Donny’s Road House, the Silver Saddle, and Sal’s had fishnets up to keep objects from impacting band members. It got so you could judge the DQ (Drunk Quotient) of the house by the number of guys and sometimes women, who would come up and tell you how great you were. One guy brought us drinks between sets. When we finished we found out the guy ran a tab for the band and we had to pay for all of it, including his drinks.
Once, in a dive in West Virginia, (the dive was invented in West Virginia) the solo guitar act was so inexperienced, he couldn’t finish a song without a major mess up. The poor guy was about to be tarred and feathered. My buddy, who was driving, decided I should finish the gig for the guy and got him to lend me his guitar. I played Country Roads by request every other song until they closed. Let’s just say the DQ there was about 150 out of a possible 100. The owner gave me $100, though, so it turned out good for me.
Consequently, I don’t usually get too riled up about playing a new place. After all, what could be tougher than playing a bar where bikers throw beer bottles at the band and keep score?
I’ll tell you what: Playing for pre-school kids ranging from toddlers to 5 year olds. No DQ in this place. No polite applause. If they liked a song, they screamed with the joy only a four year old can have. If they didn’t like it, they told you. “Mr. Larry, that wasn’t a good song, play Spiderman.” One cute kid put his hands to his ears and ran to the back of the classroom. I am waiting for a bill to pay his therapist.
Raw expression is what you get from children. No veneer of civilization. No easily bruised egos allowed here. They really liked the Unicorn song with hand signs for all the animals. I played Proud Mary and they came in on the chorus in a way that would have gotten them hired by Tina Turner. When I played a song with a beat, they danced. At least most did. They whirled like Warner Brothers’ Tasmanian Devil, somersaulted, and crashed into each other. When I ended the song they asked for more rock and roll. So much for all the time I spent learning to sing about Old MacDonald and his farm.
Mostly, they just had fun. I laughed so much, my side hurt. I can’t remember how long it has been since I did that.