The Hound of the Salernis 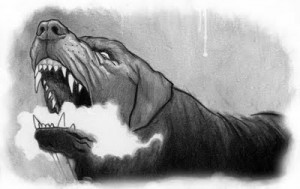 We were planning to send Sorcia to doggie day camp while we were away for the holidays, but my sister-in-law Deb said that she and her husband Larry would be happy to watch her instead. This little gem was waiting for me in my In-Box upon my return …

So it came to pass that, in these Retro-Victorian times, the legend of the Hound was born. No mere legend, but a real Hound of monstrous proportions and appetites. To those non-believers, I give you warning- do not be caught by the Hound during those hours when the Powers of Evil are exalted.

My wife was the harbinger of this adventure, as she was when we met. I shall relate the tale of our meeting when the world is prepared to hear it. She mentioned, in her casual way, that her brother would be stopping by. I always enjoyed Robert’s visits and was thus cheered by the prospect that my retirement would be raised from its mundane moments. The bell rang and one of the denizens of my household showed him in.

I gasped when he entered my sitting room and laboratory. There with him stood a huge Hound. No ordinary canine this, but a giant, thrashing, and energetic beast, whose demeanor hearkened back to some primordial forbears. He managed to control the snorting creature, whose breaths were of the same proportion as our most powerful locomotives. “Good day, Lawrence, I see you are looking fit and ready to spend time with my companion.” In an instant I knew that Deborah had enlisted me to help confine this Hound while her brother was off to climb mountains and pursue his explorations of the Poconos or some other distant place.

“Good to see you, Robert, I see you have brought a friend.” Our dialogue went no further for the Hound leapt up and proceeded to slather my face, as though tasting a meal just before consuming it. As I could only see the gaping maw and huge teeth, I do not know what transpired for several moments. Only when the Hound lavished the same greeting to my beloved wife was I able to take in the scene. 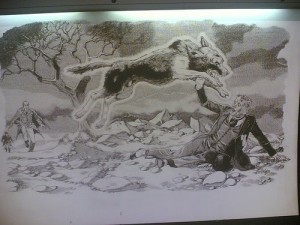 “Lawrence, I have brought you all that you need to feed the Beast. She must be fed only what I give you. To do otherwise could result in dire consequences.” I knew better than to ask what those consequences could be.

“Cheerio, Lawrence, I’m off” and without so much as a dialogue tag, he was gone. Deborah was, in the meantime, feeding the creature something. I immediately perceived that she had not taken any of the victuals her brother left. “Deborah! You have fed the Beast something your brother has proscribed.”

“What harm can it do?” she asked, guilelessly. We would find the answer later with our noses.

I will not burden the reader with the minutia. For four days the Hound held us captive and captivated. I was intrigued that such a demonic canine was of the gentle gender. What if this monster had been the male of the species? I shuddered at the concept. Nonetheless, as the days passed we developed a genuine affection for her. For the time she was in our home, peddlers eschewed our door and our meager estate. Lesser dogs ceased to bark when she retorted with a sound akin to thunder.

When Robert returned to collect his Hound, we sadly turned her over to him. While we did not tame the Beast, we learned her ways and even laughed at her antics. Thus we knew the savage Beast could show loyalty and stoutness of heart. I could see by the look in Deborah’s eyes that we would soon be searching for our own legendary Hound.