The World of Steampunk: A guest post by Eden Unger Bowditch

Today Eden Unger Bowditch is here as my guest to share her discovery of the wonderful — and eccentrically fashionable — world of Steampunk, as well as her experience at the Steampunk World Fair. (I want to go!!!!)  Eden is the author of The Young Inventors Guild series:

It is 1903. Thirteen year old Faye from India is passionate about science and afraid of showing weakness; ten year old Wallace from Long Island is fearful, but an expert with magnets; twelve year old Noah from Toronto loves food and practical jokes; and siblings Jasper and Lucy round out the group with Jasper serving as the protector and Lucy shining with her knack for language and a photographic memory.

In The Atomic Weight of Secrets, the children are whisked away from their homes to Sole Manner Farm, an abandoned farmhouse outside Dayton, Ohio, and put to work on an invention that will change the word forever and that challenges their very distinct talents and personalities. In The Ravens of Solemano, the children embark on a journey to Solemano, Italy, where they gradually learn more about the origin of the mysterious men in black. 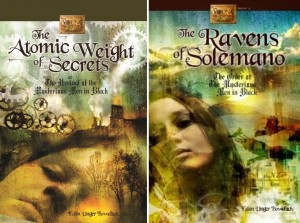 Now, I’ll turn over the blog to Eden:

I discovered the world of STEAMPUNK by accident. It was like wandering into a party where everyone is wearing your style of clothes! Before starting the Young Inventors Guild books, I had never heard of ‘steampunk’ or the likes. Yet the Young Inventors Guild books take place around 1903/1904 and, well, they clearly have a lot to do with invention. Steampunk was a place my books could call home.

It was artist, Steve Parke, who first said the word to me. He was working on the cover of The Atomic Weight of Secrets… and said how ‘steampunk’ the book was. I had to look it up. Yep. It certainly seemed like a fit. As soon as the book came out, various steampunk publications (not YA or kids, even, just steampunk) contacted my publisher, wrote reviews, offered giveaways of the new ‘steampunk’ novel. I was invited to be a panelist at the Baltimore Book Festival with Kelly Link, Gavin Grant, and Matt Kirby. Kelly and Gavin had published the Steampunk Anthology so they were in the know. Matt and I were still not so clear on what steampunk was but had been told our books fit into that genre. In September, I was speaking at a National Women’s Book Association event in LA with authors Maria Lennon and Cecil Castellucci. Cecil gave me an excellent description of Steampunk. She basically said that it was Victorian Sci-Fi. And it is. 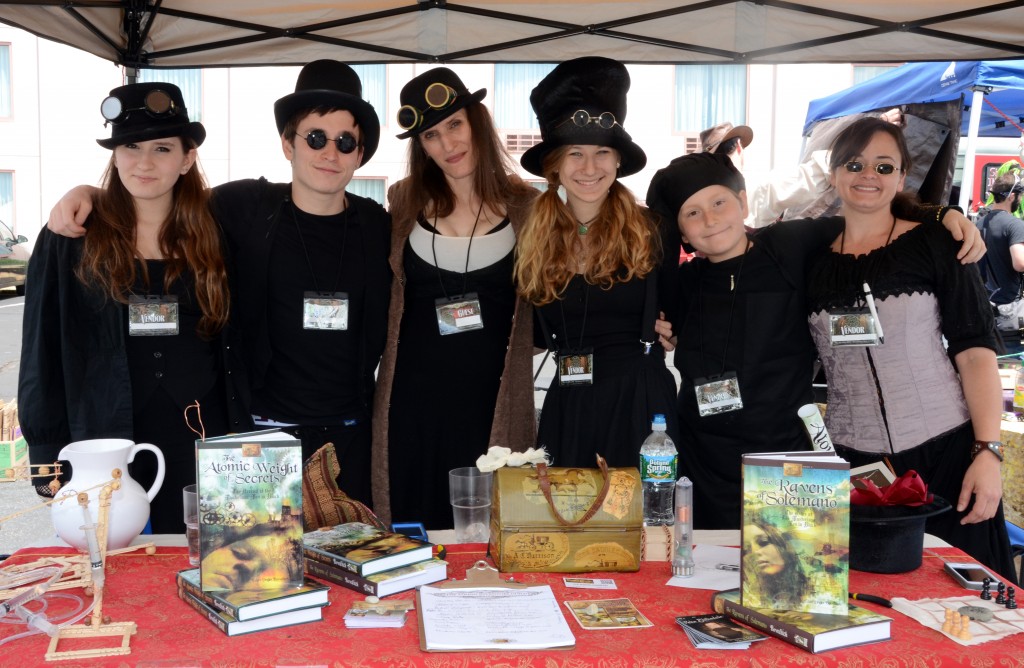 Armed with a clear understanding, I felt much more at ease in Morristown, NJ at the International Steampunk Convention in October of last year. There were inventors and blacksmiths and wonderful performers. Everyone said this was a small version of what was to come- The Steampunk World’s Fair. That event is what most of the serious steampunk community folks look forward to all year. I was thrilled to be invited! By May, I was ready for the Steampunk World’s Fair in Piscataway, NJ. 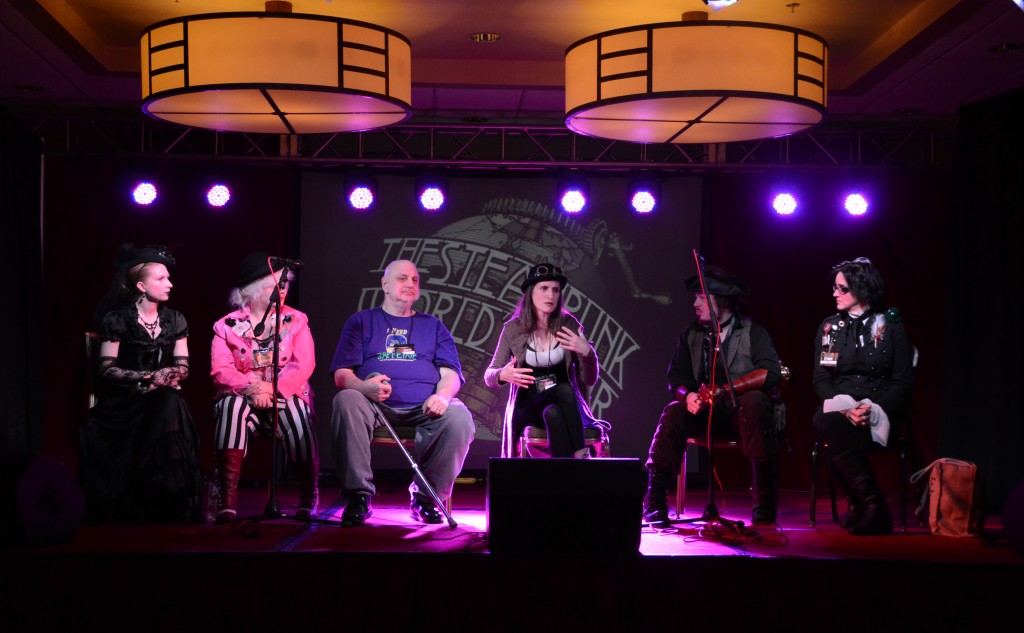 The Steampunk World’s Fair was an incredible spectacle! There were two hotels connected by a large parking lot. The entire place was turned into a turn-of-the-century (I mean the last one!) invention party! There were over eight thousand people at the event! There was a robot made out of a train! I kid you not! There were automatons aplenty, goggles galore, and fabulous feats of physics. There were lots of science professors and lovers of science, as well as artists with a Victorian flare. The ground floors of both hotels were turned into marketplaces where one might find top hats, corsets, goggles, automatons, spyglasses, handmade games, and antique items from old science labs. There were fashions shows and music concerts and pieces of theatre. I was on a panel of Steampunk authors and I brought inventions from both books to share with visitors. It was wonderful to see people from the International Steampunk City event and meet tons of new readers, too! My own kids all had a blast. There were maker stations, science labs, and games everywhere. 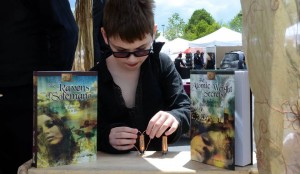 From what I have learned, there are Steampunk events around the country. What a fun way to get some history and make some of your own!

Eden, thanks so much for sharing your experience and these gorgeous photos! Yes, there are Steampunk events all around the country, including Dorian’s Parlor, a bi-monthly ball in Philadelphia which I once attended as a guest reader. HERE’S my post about that.

You can find the wonderful Young Inventors Guild books on Amazon and B&N and your favorite indie stores. You can also learn more at the YIG Facebook page.