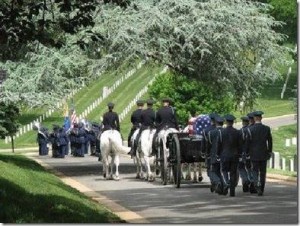 Another Memorial Day approaches.  It seems this annual event comes every few months, a sure sign I’m getting older.  A few years ago, I had the honor, and I mean a real honor, to attend a good friend’s father’s funeral.  Rick was my best man at my wedding.   His dad was a retired Army Colonel.  Col. Mock retired in the early 70’s and, oddly enough, started a music store in Northern Virginia.

Col. Mock and I were both Old Crows.  We shared memories of similar duty stations and the odd nature of SIGINT.  We couldn’t talk much about our work or we would have had to kill each other.  Suffice it to say, Col. Mock was a highly decorated hero.  Like other real heroes, he was afforded a place to rest at Arlington Memorial Cemetery.

Not every vet can be buried there.  I’m sorry that the facility is overcrowded and the Armed Forces have been forced to adopt some pretty steep entry requirements. (Which, at my last look, I couldn’t meet) These requirements can be part of your homework to look up.

The ceremony is very moving at Arlington.  The Army ensured that Col. Mock was carried to his resting place by respectful and caring soldiers. An honor guard consisting of some 30 Soldiers, a real military band, and a horse drawn caisson took him to the gravesite.  3 volleys of shots, Taps, and a folded flag to the widow wrapped it up.

I fell in with the detail commander after the ceremony and told him how, as a retired Marine, I was impressed and proud of the detail and their execution of the ceremony.  The soldiers were somber and respectful. Their appearance and field drill was impeccable.  These troops were the Army Old Guard and they weren’t just showboats.  The Major I spoke with was a Ranger, who wore the Silver Star, the Purple Heart (with repeat award star), the Bronze Star (with Valor clasp- a combat award), plus the other ribbons of a successful career officer.

I discovered that he had as many as eight interments a day, six days a week, and there were other details for the other Armed Services. There was about a 3 month backlog.   WW II heroes in their 90’s and 18 year old men from Afghanistan all coming to rest at the same place.  WWII hero John F. Kennedy lies there with his sons and brother, Robert.  Many of the most revered names in US military history are there.  The Tomb of the Unknowns is guarded around the clock by some very serious guards.

For your final homework and exam, make the pilgrimage.  You can use DC and all its monuments, the Smithsonian, Holocaust Museum, Capitol, and White house as an excuse to go, but do cross the Potomac and spend some time there.  It’s a 15 minute walk from the Lincoln Memorial across the Memorial Bridge.  The visitors’ entry fee has been paid for by the residents.